The more I think about the last post, the more I am reminded of the issues surrounding drawing as a type of material thinking. I have in recent posts tried to open out my ideas on drawing as a record or trace of physical interaction, but another way of exploring this is to think of drawing as a particular type of material transformation. In doing this you can then think of drawing as a temporary space for a meditation on the movement between organic and inorganic matter.
Perhaps I need to retrace my thoughts. Nancy Rubins' drawings were made of graphite on paper. Graphite, (it used to be called plumbago because it looked so much like lead), is a crystalline allotrope of carbon, an element that because of its high valency of 4, is very good at making connections with other elements, one result of which is that in science fiction we are often referred to as 'carbon based life forms'. Graphite is formed as veins within metamorphic rocks, and these veins are the result of the metamorphism of organic material in limestone deposits. I.e. graphite is a material made from a stone that is in turn made from organic materials. If you look closely at limestone or chalk deposits you will often see the tiny remains of shells. A sedimentary rock, limestone is mainly calcium carbonate (CaCO3) which is what forms the mineral calcite. Calcite is made from the slow accumulation in shallow seas of a constant falling rain of shells, corals, algal and fecal debris. The slow time of a rock, if speeded up to the time awareness of a human, reveals it's complex entanglement into organic life. The structures of chemical compounds are often visualised through drawings, both two and three dimensional and the Rubins exhibition also included sculptures held together with tensed wires, structures that echoed those first of all explored by Buckminster Fuller. 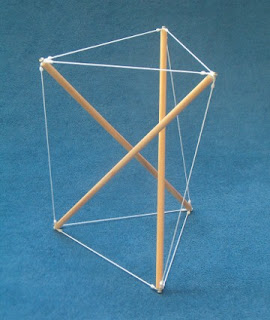 Buckminsterfullerene, the chemical compound of carbon when it is found in the form of a fullerene has a shape very like a spherical football. These forms when visualised help us to think about how the world at a deep level is interconnected, and at this microscopic level there is a constant movement between organic and inorganic matter; humans being both made of these elements and existing in the midst of them. Our bones are made in a very similar fashion to the way that shells are extruded, both needing a liquid environment within which to grow. Our blood relies on iron as a carrier of oxygen around the body, which is why our blood is red, an octopus relies on the copper-rich protein called hemocyanin to do the same thing as our much more familiar haemoglobin, which is why an octopus's blood is blue. We are part of an ever changing dance of materials, materials that are constantly metamorphosing into interconnected organic and inorganic forms and as I make my drawing in chalk or graphite or whatever materials are available, in many ways I am simply performing just another materials dance routine, but one that for a brief moment, might help an often overly self obsessed conglomerate of chemicals in its self reflection.

Click on this video that was made to help people draw the Buckminsterfullerene molecule. 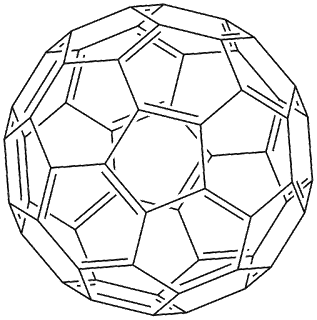 Above is a drawing of buckminsterfullerene. Below is an image of one of Nancy Rubin's sculptures alongside one of her graphite drawings in the Gasgosian. 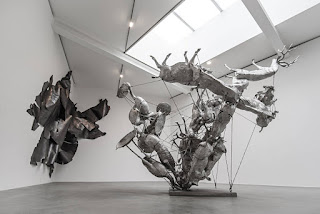 Rubin's work could therefore be read as metaphors for the underlying structural elements in all things, whether these be organic or inorganic. The casting of animals into metals, now becoming a reminder of the essential elements that all animals are made up of.

So a few points:


A rock is weathered, its weathered particles when they are small enough dissolve into water and as they do so they become chemically connected with other elements and transformed into new compounds.
An animal eats vegetables made of chemical compounds 'sucked' from the earth by plants. The plants have been able to survive because they can trap the energy of the sun through photosynthesis. The plant made compounds are  broken down by the animal's digestion system and transformed into useful building blocks for its own life. Eventually the animal will die and the various compounds will be returned to the earth.

It could be argued that all drawings are also material reflections on these processes. 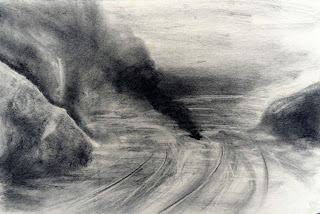 Drawing using charcoal made in the ceramic boat below 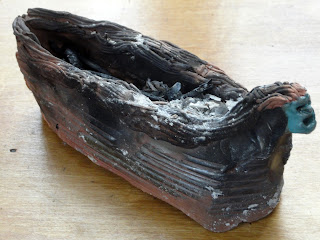 The charcoal I made for the drawing above was made in a fire that was partly covered up to reduce the amount of oxygen that could get to the wood. Sticks were laid into the body of the ceramic 'boat', which was ritually burnt and then the 'boat' was retrieved from the fire once everything had cooled. The ritual was a way of reminding myself where things come from, and how ideas can have complex entanglements with history as well as chemistry. The drawings made from the charcoal became a sort of mental re-enactment of the associations I began to think about as I drew. Because charcoal is burnt wood and I had been researching older myths, I was very aware of the burning of ships as a funeral ritual. Fire as a transformative element is central to my thinking here, but also the boat at sea, in particular the "sea in the middle of the earth," or 'Wendel-sae' as it was in old English. As of this day 19th of February 2018, just 50 days into the year, there have been 404 recorded migrant deaths in the Mediterranean sea. 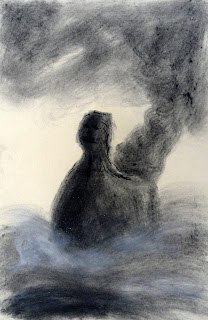 The white marks were made from wood ash and the point I am slowly getting to is that I have begun to feel that drawing can also act as part of a series of rituals designed to help us think about what goes on. Hopefully not to privilege human ideas over other sorts of chemical transformations but to alchemically celebrate the interconnectedness of everything.

Recent posts related to the idea of drawing and material thinking.

This blog is designed to help students think about how to contextualise drawing within a Fine Art practice. To get the most out of the posts go to the first post, March 2014; the 'Introduction' and make your way forward, but it's also fine to just browse using the 'Index' If you need me to explain anything just use the comments box to ask questions or e mail me.
If you want to search this blog, type into Google, site:http://fineartdrawinglca.blogspot.com/ add a space after the / and put in your search item.