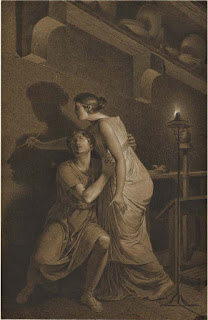 The Invention of Drawing, c. 1791. Black and whitechalk on brown paper

This blog was initially set up in order to promote work done within the Fine Art Drawing Strand of the Leeds College of Art BA Fine Art drawing program. It was designed to provide a forum for the discussion of issues related to drawing as a discrete practice. However things change, the Leeds College of Art is now Leeds Arts University, which in essence means that it can now award its own degrees. The BA Fine Art course no longer has a discrete drawing strand, drawing is now regarded as a possible way of solving problems amongst many others, and is subsumed as part of a general fine art course that allows students to make videos, put on performances, paint paintings, do site specific installations, conduct web art projects, create text pieces, make sculpture by carving, modelling or constructing etc. etc.


So why still a blog on drawing? Art has a long history and part of the business of being an artist is to find some sort of thread by which you can attach yourself to that history and drawing can be a very strong thread. But there is a much more important reason and that is that drawing is itself a metaphor for a materialist approach to thinking.


I strongly believe that we need to move away from the idea that drawing is about a medium. Yes we often begin by using a pencil or chalks to draw with, but we can also draw with a computer or mime a shape in thin air. If instead we look at drawing as an activity or process, this changes things and we can see that it is about a particular type of non-verbal and non-numerical thinking.


If we begin with a simple point and a line, that simple point could be a small stone on the ground or a star in the sky, it is a method of defining a starting point. A line can move away from that point and as it does it indicates direction and a linking of one point to another, as well as dividing one side of the line off from another side. Here we have the line as a boundary, an idea that links it to map making, the ability to separate one form from another, to be able to compare distances and or closeness of things and to indicate both ownership, (by enclosure or measurement) and our own position in space. From this basic set of concepts many actions arise. For instance sewing, or threading lines, this process can lead to the development of lines into planes, but also can be seen as a way of knotting or weaving ideas or thoughts together. All ideas need materials to make them real, so a line that is also a length of string, or a thread can make some ideas come into fruition in a different way to a line made by walking through long grass or by incising into rock.


Drawing also has a very useful habit of getting around the stickiness of words. Words can tend to identify things, but in fact things as such don’t really exist, there is only a constant process of change. What a word does is slow time down. For instance, this bottle I have in front of me has a name, it is a ‘glass bottle’, two words that tell me about what it is made from and what its possible function might be. But at some point not too long ago the glass might have been sand on a beach, the paper that tells me it contains orange juice may well have been part of a tree or a cotton rag and I may use the bottle in the very near future as a protruding eye in a sculpture I am making. A drawing is something that helps me both think about what I’m experiencing and experience it. This thinking through drawing is what this blog tries to focus on. It also points you in the direction of current drawing exhibitions, asks questions as to why we think about drawing in the various ways that we do, tries to explore the limits of drawing within a contemporary context, such as where is the line between drawing and film-making or drawing and painting. It looks at how other professions use drawing, such as archaeologists or crime scene investigators and it tries to develop a moral framework within which drawing might become a useful tool for the understanding of those bigger questions, such as how should we relate to each other and the world around us?


There is often a lack of logic to be found in these posts but that is part of the point of the process of keeping the blog. The threads woven by these various posts will fall apart if they are not woven together and in order to weave them together sometimes they need to cross over or under each other in unpredictable ways or link with unexpected other threads to produce a texture that is unique to this particular woven cloth. I will attempt to post at least once a week, but will of course sometimes fail to do that. Feel free to contact me, I can be e mailed at garry.barker@leeds-art.ac.uk, my current work can be seen at the Leeds Arts University Repository (click 'Browse by Author' button top right). I use Twitter sometimes and Facebook but am not a fan of either. I am an artist rather than an academic, so forgive my intellectual flightiness and lack of research rigor. I am a firm believer in W B Yates’ “I made it out of a mouthful of air”, a statement that shows that he both understood media specificity and the fact that we never know what we are going to do until we have done it. This being something that can apply to a drawing as much as to a conversation, especially a conversation understood as a drawing. Which is where my own drawing practice begins. 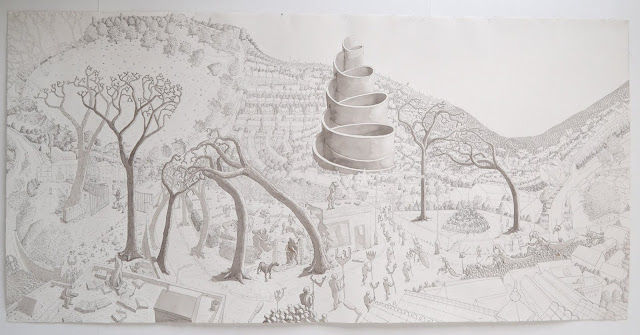 The following are useful links and these will be added to:

TRACEY This is the site for drawing and visualisation research.
The Centre for Recent Drawing
The Drawing Centre
The Campaign for Drawing
Definitions of drawing
Exhibition review with lots of links to interesting abstract drawing
Some drawing theory
An interesting blog about drawing
Drawing and cognition
Drawing: the invention of a modern medium
Posted by Garry Barker at 03:19

Email ThisBlogThis!Share to TwitterShare to FacebookShare to Pinterest
Labels: an introduction, Drawing, drawing as a belief system, Garry Barker, why draw?