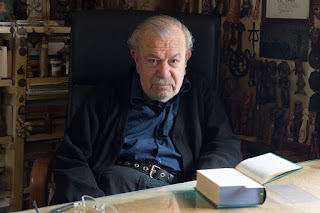 The Turkish artist Yuksel Arslan died in April, a Turkish artist that I know, Deniz Uster (who also makes very interesting drawings) sent me a message to tell me the news, she said she saw the similarities between his work and mine. Yuksel Arslan was one of those artists that you probably would not come across unless you had a particular interest in drawing as narrative. I came across his work a few years ago and always admired the way he could compress an idea into an image.
He called himself a 'person who scribbles', the term artist he felt had too many connotations and offended his socialist sensibility, a sensibility that would cause him to draw coins as heads for the 'capitalist oriented'. 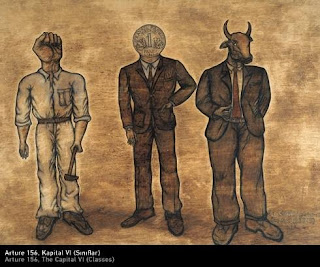 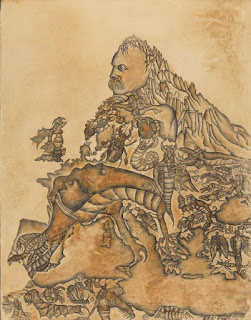 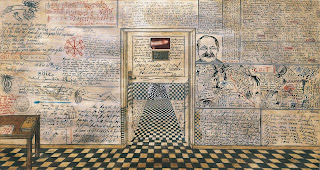 He wrote across his images, sometimes to the point where the writing takes over and becomes the main pictorial element, but everything is integrated by a sensibility that always runs throughout his work. He refers to both Eastern and Western philosophers and writers in his work, and looks at subjects as diverse as politics, anatomy, religion and nature. He called his works, 'Artures', not wanting to be categorised by any existing art genres, and for metaphoric purposes used ash, egg white, billiard chalk, honey and sometime his own body secretions as binders for his pigments or directly as stainers. These materials when worked together gave his work its characteristic warm tinge. 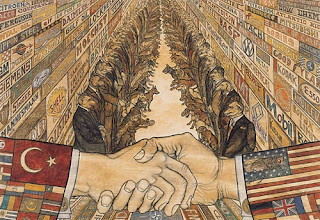 I have always thought that one of England's best artists was James Gilray and Yuksel Arslan is an artist of a similar sensibility. 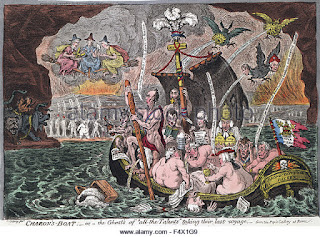 Political satire and Surrealism fit together neatly. If I think about contemporary politics, the world stage feels to me as if reality is usurping fantasy. Politics is no longer the place for the sane, it has become a bear-pit for the paranoid and delusional. It is good to see that the tradition of political cartooning continues and perhaps one day its best practitioners will be recognised as the fine artists that they are and will hang in the Tate Gallery alongside all those other artists who have struggled to make sense of our complex and awe inspiring world. 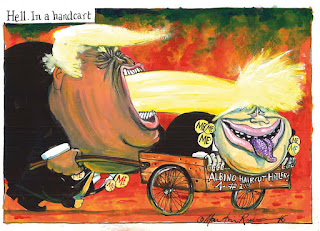 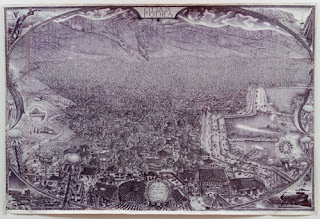 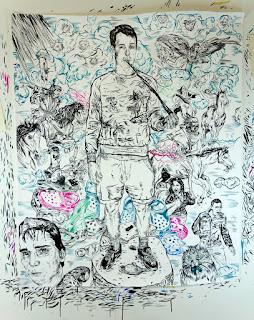 
I have been trying to encourage students to enter competitions lately and one of the most prestigious is the Jerwood Drawing Prize, which is coming up soon and registration for it is now open. 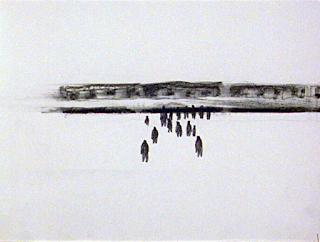 The winner of the Jerwood Drawing prize can be very unpredictable, which is one of the most interesting things about it, so if you are worried that your work might not fit the criteria for selection, don't, just put something in and you might be surprised.  In 2014 Alison Carlier won with a sound piece and Karolina Glusiec won in 2012 with a hand drawn animation, see another of Karolina Glusiec's animations above.

Email ThisBlogThis!Share to TwitterShare to FacebookShare to Pinterest
Labels: Drawing competition, The Jerwood

As I usually do this time of the year, I have been booking an apartment to go and spend some time over at the Venice Biennale. Each time I go I try and filter out some artists or exhibitions that seem to have a direct relevance to students working within the drawing strand at the college of art. See these examples from the last biennale.

However when I think back to 2015 perhaps it was no one piece of art work that affected me, it was instead a Huffington Post newspaper story about an incident that happened at the beginning of the festival. A floating bridge bringing a dozen VIP guests to the event broke, throwing all of them, Miuccia Prada included, into the lagoon. I tried to collect all the images of the ‘disaster’ I could find and sequence them to make a mini storyboard, I have yet to finish the rough animation I was making of the event, but if I have time I shall. I think the images have the making of an epic, think ‘Titanic’ and major film stars playing the roles of Ms Prada and the other art socialites. The accident didn’t kill anyone, but the sudden intrusion of reality makes everyone more human, they share in that moment responses and reactions that are outside of the normally contrived looks and trained body postures. Sadly, much of the art they were going to see, which purported to be a response to the political realities of the time, was not of a similar level. The the entire Biennale was centred around a continuous reading of Marx, which itself was moving, but as I went from pavilion to pavilion and from gallery to gallery, it was hard to find any artists that could make you stand back and think with the same degree of sharpness that this event had.  This year I have some work over in Venice in one of the fringe events, work done in response to the ongoing migrant crisis. Looking back at my own work, I could criticise it for the same inadequacies that I saw in others on my last visit. When art does reflect on real life traumatic events it sometimes has to go into territories few of us would venture into, Goya for example eventually descends into his own despair. Perhaps what interested me in this event was that it was also funny and laughter can help us all face despair. 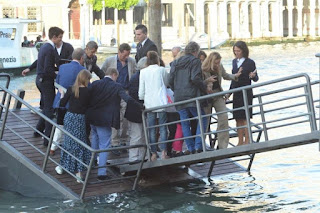 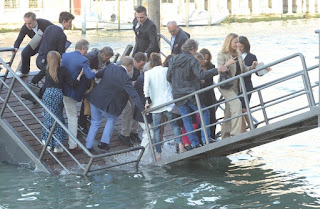 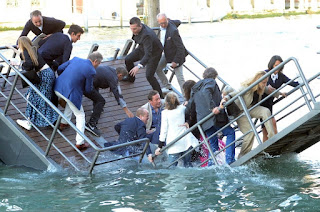 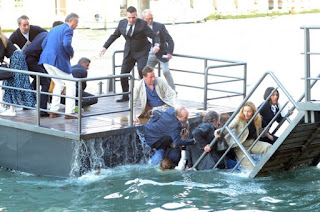 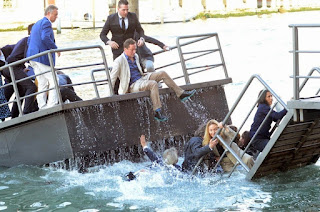 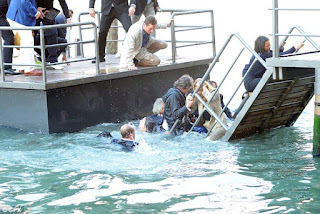 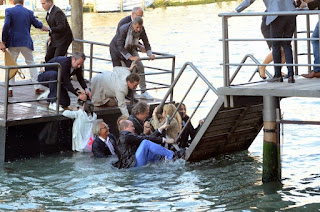 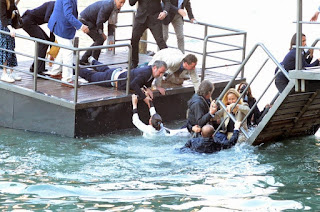 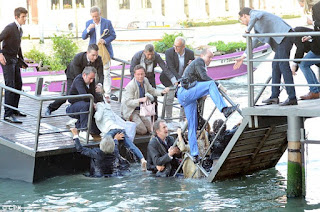 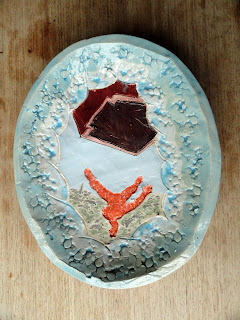 From a series of ceramic dishes

Yesterday I went down to Wiltshire to the Rabley Contemporary Drawing Centre for the opening of the SKETCH 2017 exhibition. There were some wonderful sketchbooks on show and I was excited to find out that the overall winner this year was myself. The two sketchbooks I had submitted were closely linked to an ongoing series of large drawings related to my feeling about the refugee crisis, (find some images of more worked through pieces related to the theme below) In particular it was rewarding to see that they had been interested in both my observational work, to quote, "The smaller sketchbook reveals the artist's draughtsmanship in beautiful pen and wash topographic studies..." and the more imaginative studies where I was working ideas out for both ceramics and large drawings. "A Dante's underworld like colony of figures tumble and fall from rocks, imagined platforms and through holes..." 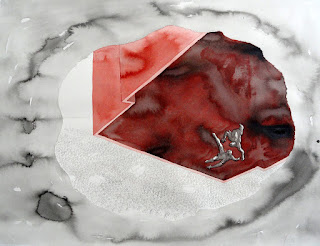 I did put up a post on my initial submission here

From a series of large tower drawings, each one approx 6 feet high

It is wonderful to have others appreciate your work, especially when you really respect the institution that is hosting an exhibition and the selectors and curators. So those of you who are thoughtful about putting work into selected exhibitions, if you don't get selected keep going and hopefully eventually someone will see that you have done something that is worthwhile. I have put work into these types of competitions many times and the last time I had work in a significant national exhibition was in the Hayward Annual British Drawing exhibition in 1982, a 35 year gap. I have of course had work in many exhibitions since then but have rarely been able to get through blind submission processes; I have always believed that the best of my work is un-photographable. That's why I'm particularly interested in the recent work I have been doing with Adam Glatherine, whereby we are looking at how to use 360 degree technology to visualise drawings. This is an example.

360 degree view of one of my exhibitions

The exhibition will tour so if you do have a chance to see it go along because it gives a fascinating insight into how artists work, a sort of private behind the scenes view of how to visually think, in effect a 100 sketchbooks give an audience a chance to see a 100 mini exhibitions.

There are reviews of the touring exhibition here and here. 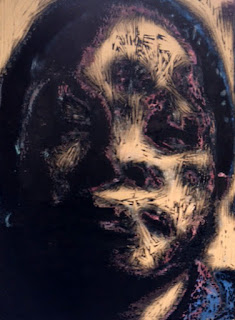 Drawing has very close relationship with printmaking and printmaking can sit between both drawing and painting. A very interesting Leeds exhibition to go and look at if you are interested in the relationship between the three disciplines is Leon Varga’s 'Cuts and Blocks' at Seagull’s new artspace.  The show consists of a large-scale portrait installation consisting of shallow carved roughly 8 by 4 foot wooden boards that are treated as you would a wood or lino cut but with an intention of making these large wood cuts images in their own right. The scale is impressive and the handling a product of the experience of both painting and making prints. Most of us at some time or other have decided that the block that the print is made from seems to work better than the print itself. Leon has allowed that surface richness to come through, as well as encouraging the possibilities of surface ambiguity as areas become filled with ink or paint and begin to suggest new forms.  I’m not sure how long the exhibition is on, so contact the space if you want to go. 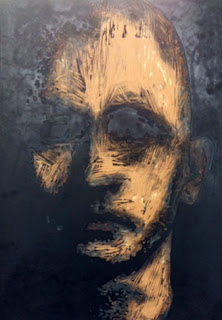 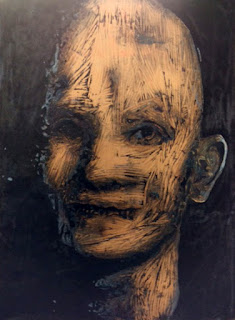 Leon also works at the college, so it's a chance for you to catch you with his latest work and also get to check out a new art space.

As it's getting towards the end of the academic year can I also remind you all about the importance of keeping up with local exhibitions. I have posted on this before but as a reminder check out this earlier post.

Check out the exhibition details here: