Why does ink stick to paper?

I use water-based ink on paper as my drawing materials. I sometimes categorise my drawing materials into those that flow in water as if in a primordial sea and those that are scraped off on hard surfaces like some form of geological attrition. There is for myself a rightness about the flow of ink, it feels as if I am tapped into working with something akin to my own life blood.
But in order to explain this I need to explore some very basic things about drawing, to look at the actual processes that allow drawings to ‘stick’ to the paper they are made on.

I choose to use water based or hydrophilic inks, which are in chemical terms called polar inks, i.e. their molecules have a high attraction for water molecules.


I use paper that is made of cellulose fibres, and cellulose is a polymer of the simple sugar, glucose.

The key point about cellulose is that the polymer chains that bind cellulose together have -OH or hydroxyl groups sticking out all around them; they look as if they are wanting to bond with something. Hydroxyl groups are often found in organic or ‘life’ chemistry and are vital to the formation of sugars and alcohols. A hydroxyl group consists of one hydrogen and one oxygen atom, which is of course closely related to the structure of water, which consists of two hydrogen atoms bonded with one oxygen atom. Hydroxyl groups are polar, and the oxygen side is always negative, while the hydrogen side is always positive. All a hydroxyl molecule needs to become a water molecule is another hydrogen molecule, therefore it has a high capacity to form a hydrogen bond. The capacity of a hydroxy group to form hydrogen bonds imparts water solubility and internal structural stability to proteins, including amino acids and hydroxy groups also participate in the dehydration reactions that link simple biological molecules into long chains. I.e. they allow some of the fundamental life processes to be maintained.

So when my inks do attach happily to their paper surface, they will attach initially using a hydrogen bond, which is “the electrostatic attraction between two polar groups that occurs when a hydrogen (H) atom covalently bound to a highly electronegative atom such as oxygen (O) experiences the electrostatic field of another highly electronegative atom nearby.”

As I use my water based or hydrophilic inks, they will create molecular bonds within the thin layer of water that I have created around the cellulose fibres as I drag my ink laden pen or brush across the surface of the paper. Put into very basic terms, ink sticks to paper because it has a high affinity for the medium it's being applied to.

On the other hand there are hydrophobic surfaces. When ink is drawn onto a surface that it doesn't like, it aggregates, it sort of clumps together, as if it is trying to avoid any interaction with the surface. Just rub some butter or lard on a sheet of paper and try and draw on it, you will see what I mean.
This is not about repulsion between individual water molecules and lipids, it is because of the strong attraction of water molecules for one another in comparison with the slight lipid attraction.

When water soluable ink begins to interact with lipids, (organic compounds that are insoluble in water, such as fatty acids or grease), the water forms ordered cages around the hydrophobic elements, (the lipids), because of the way the water molecules are more attracted to each other than the lipids. These cages cause a decrease in entropy, and by the 2nd law of thermodynamics, this is unfavorable. I.e. the system cannot pass from one stage of thermodynamic equilibrium to another, therefore the internal structural stability that hydroxyl groups give to proteins, would not be possible. 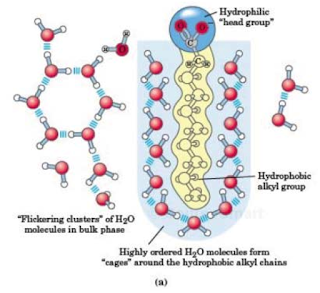 In the diagram above you can think of the ink as the water, and the hydrocarbon chain of the lipid as the greasy surface.

For me this is a deep metaphor, the difficulty of trying to draw with water based inks on a greasy surface, is reflected in the fact that the molecules cannot interact positively and the ease in which my ink flows and bonds with paper, reflects the way that water operates as a life enhancing medium, the complex molecular bonds that are needed to create amino acids being not that dissimilar to the way that ink sticks to paper via intermolecular attraction.

The fact that I can think of my ink as being like blood is not too far fetched, iron gall ink a purple-black or brown-black ink made from iron salts and vegetable sourced tannic acids was the standard drawing ink used in Europe from the 5th century to the 19th century, and remained in use well into the 20th century.

The ink stuck so well because iron sulphate, (FeSO4) added to tannic acid (C6H2(OH3COOH) had a very strong affinity with the cellulose fibres of vellum and paper. In fact the bond was so strong the only way to erase a mark was to sand the whole surface down.

The other area of intermolecular attraction that is also helping to hold the ink on paper, (London forces), also operates as one of the main forces when holding marks on paper when drawing with chalks, charcoal and graphite, so I will look at this in a future post, when I will try and open out some of the more geological aspects to leaving a mark on paper.

There is also capillary action to consider. If you pour mercury over your paper it will not wet it, its mercury's surface tension is so great it adheres to itself. But if you pour water onto paper it will wet it, even if the paper is sized, because the surface tension of water is much less. If however you clean the surface of a metal, such as aluminium, mercury will 'wet' that.

At a level below all this is the behaviour of sub-atomic forces and the fact that these are shaping everything we do is sometimes forgotten. If you want to explore these in more detail go to my posts of drawing and quantum theory.

I did refer to London Forces briefly at the end of an earlier post and you can find that here.
See also:


For more on oak gall ink
For thoughts on hard dry drawing materials
Posted by Garry Barker at 07:55 1 comment: 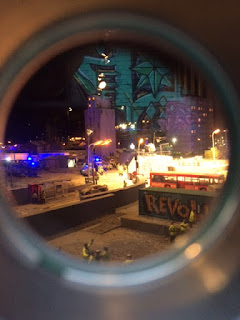 A view through one of the peep holes

Today is the final day that you can get to see Jimmy Cauty’s “Aftermath Dislocation Principle” at the Chemic Tavern in Leeds.
'Aftermath Dislocation Principle' is described thus…”Housed in a 40 ft shipping container, The Aftermath Dislocation Principle (ADP) is a monumental post-riot landscape in miniature. This dystopian model village is a charred landscape of broken windows, flashing strobes, and collapsing buildings where only the police and media teams remain in an otherwise deserted, wrecked and dislocated land – all in 1:87 scale and viewed through peepholes in the side of the container”.
If you haven’t been to see it do go along tonight. The 40-foot spray-painted container is parked in the pub car park at the back and you look at the installation through peep-holes that are put in at regular intervals around the container.


I have posted before on the relevance of making models in relation to the concept of drawing, see but this particular piece opens out a host of other issues not least  in relation to its location in the Leeds suburbs, rather than in the grounds of an art institution.There is a long and particular history of making illusions that can only be seen through peepholes, such as Van Hoogstraten the 17th century Dutch painter who used his knowledge of anamorphic perspectives to construct "peepshows" or "perspective boxes", which like Cauty’s “Aftermath Dislocation Principle” were viewed through peepholes in the sides of the box like container. I will be posting something on these at some point in the future, as they are an important aspect of the history of uses of illusion in art. 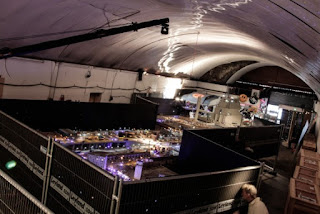 The installation with the top removed

Travel from Leeds centre out past the university until you get to the Hyde Park pub. Turn right down Woodhouse Street and go straight down the hill, the Chemic is on the left just before Woodhouse Street elbows right. 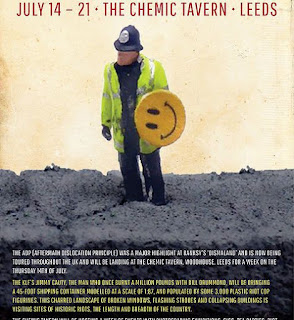 The Jacqueline and Jonathan Geststner collection of paper peepshows has just been donated to the V&A museum, this is a huge collection, beginning in the 1820s with Austrian and German peepshows, it mainly covers landscapes and historical events, not perhaps unlike Cauty’s giant version, which relies like all these objects on the special feeling we have when peeping into a closed off world. This feeling is something very special to us and may even go back to our time of being hunter-gatherers, time spent silently peeking out between the leaves of a densely foliaged bush or through a chink in a pile of rocks, there is power in being the unseen observer, especially when you are the hunter and not the hunted. 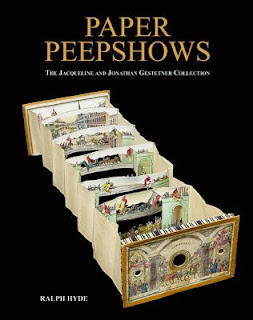