This is another occasional post about tracing. There is a show of Louise Lawler's work on at the moment.  This consists of a series of black-and-white vinyl tracings of Lawler’s own photographs. Lawler is best known for re-presenting the work of artists within the environment that shapes them, i.e. what we call the art world and related institutions and practices. Tracing is a reductive act and therefore a transformational one.  In Hannah Stamler's review 'Louise Lawler at Metro Pictures' she states, “One has the sensation of standing in an empty coloring book, a not altogether unreasonable feeling given that Lawler collaborated with a children’s book illustrator on the initial tracings”. …”Affixed to the white gallery walls, the outlined rooms simultaneously extend and flatten the space, adding to the coloring-book effect”.

What is interesting about this is how attuned we are to different types of tracing. In this case a specialist children’s book illustrator was brought in to make the tracings and therefore these ‘tracings’ are rendered in such a way that they resemble children’s colouring book pages. Lawler obviously realised that tracing is a serious business and that the key is in selection. The children’s book illustrator is obviously skilled and understands what makes for a clear read. Another person doing the tracing might select totally different areas, ones that are not so iconic or clear. I presume the final illustrations were rendered in ‘Illustrator’ especially as they were finally rendered as stick-on vinyl wall pieces and ‘Illustrator’ files are usually the norm for this type of work. This of course gives the work another connotation, that of commercial signage.

Lawler’s best known work is a critique of the art world and points out that once a Jackson Pollock is hung alongside other ‘objects d’art’ in a rich collector’s home, both objects change status and use value and become part of a series of very specialised information and value exchanges. By tracing her own work, Lawler points out how her photographic critique itself is now becoming part of the established art world norm. The simplicity of its rendering, reminding us all of the simplicity of art world values.

One issue about vinyl wall transfers is that they are a way of making a drawing an extension of the architecture within which it is placed. In this case, because the drawings are now an integral part of the gallery walls, Lawler is adding the gallery to the ‘art world’, just as the work itself is subsumed into this. On the other hand it is worth remembering that using vinyls in this way is a reasonably cheap way of getting a very professional surface and clean cut image, produced on an architectural scale. Any of you thinking about how to work directly on walls or even glass surfaces might think about investing in this type of image production. 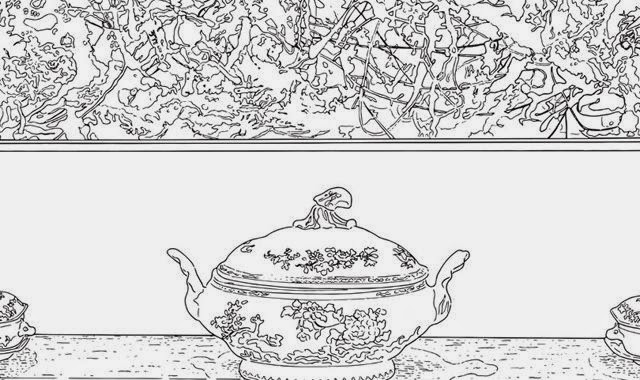 Posted by Garry Barker at 03:12 No comments: