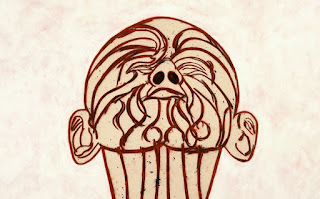 I finally managed to get over to the Cartwright Hall in Bradford to see the Tony Bevan exhibition. For those of you interested in charcoal as a drawing medium Bevan is a must see. He has been working for many years now, pushing his charcoal drawings into a territory that verges into painting but never quite leaving behind the fact that he is still drawing.
He often works directly onto un-stretched canvas, and has developed a drawing technique that relies on the fact that the roughness of the canvas causes the charcoal to spatter and break off as he pushes his charcoal sticks across the bumpy surface. He is particularly interested in how natural charcoal will break and shatter as internal fault lines are revealed as the charcoal is worn away. In particular the slight weaknesses caused by changes in the charcoal grain, for instance the notch left from where a branch has been lopped off, make for sudden breakages. As the charcoal snaps, it both makes more spatter markers and the hand’s pressure causes the remainder of the charcoal stump to drop down sharply onto the surface, causing yet another mark variation. 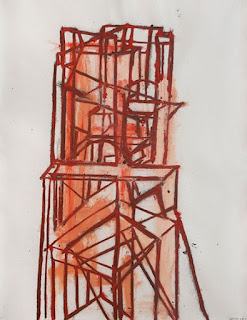 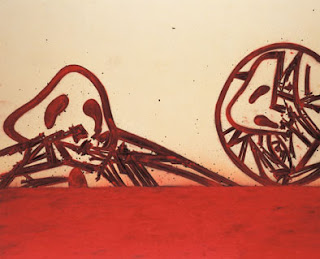 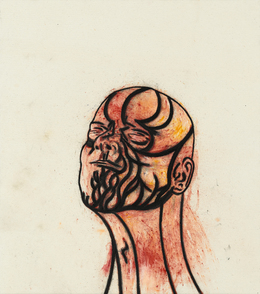 You can get an idea of how he works by watching this video of him talking about his work.

The Cartwright Hall is an interesting museum to visit if you have time, especially as its very easy to get to Bradford from Leeds by public transport. Their collection is fascinating because it has been selected to reflect the multicultural nature of the city’s population. In the gardens there is a very strong piece by the Pakistani artist Imran Qureshi. He has drawn his flower inspired patterns across the flagstones and walls, his mark-making process being a cross between spattering and calligraphy, each set of marks playing off against different elements of this formal garden. 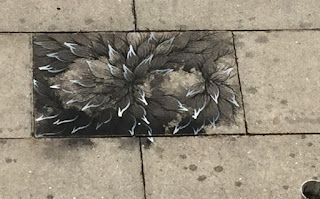 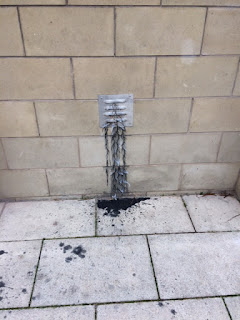 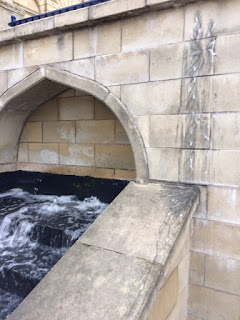 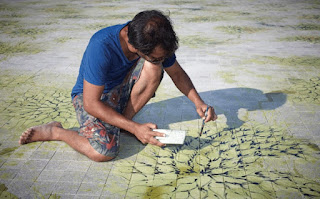 If you are interested in working outside and still remaining sensitive to the surfaces you are working on Imran Qureshi is a good artist to explore.

In the main collection I was particularly interested in how the ‘Connect’ exhibition was curated. The upstairs gallery is devoted to a mixed exhibition of art from a wide range of cultures and times, some very interesting Asian artists in particular were being exhibited, and often these were artists that had drawing right at the centre of their practice. However I was particularly impressed with the huge Hughie O’Donoghue piece ‘Three Studies of Crucifixion’ from 1996. 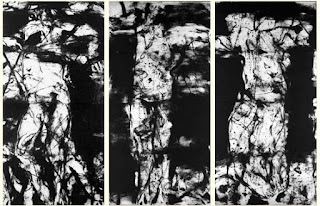 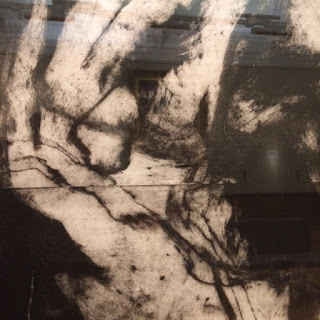 These large images are made from sections of printed papers, using a Carborundum printing technique. See: for a short video on the  technique and click for how to print from a carborundum plate.
Working in this way you can work on small sections and piece the larger image together. Because of the overall power of the final image you don’t really notice it’s made out of sections. It’s worth a visit to the Cartwright Hall collection just to see these images.

They also have a specialist collection of contemporary printmaking. The Cartwright Hall used to host the International Print Biennale and have built a collection of prints around purchases made during the period that the Biennales were staged. These include terrific prints by very well regarded artists in a wide range of print media, (Baselitz, Christo, Rauschenberg, Hockney etc etc) so if you are looking at printmaking as an extension of drawing it’s an excellent place to go and study techniques in more depth. If you want to go through their print collection and explore it in detail, you should ring first and book an appointment. For enquires regarding the print collection please contact cartwrighthall@bradford.gov.uk 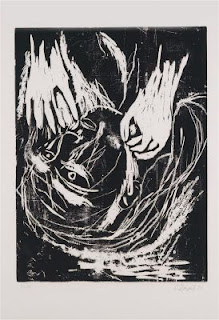 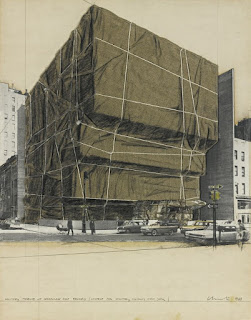 For more details as to what’s on see:

The bus to Bradford interchange goes from Leeds City Centre, either from the main bus station or The Headrow. It takes 46min – leaves every 10 minutes. Catch a 72, 670 or X6.

Then from Bradford City Centre bus interchange to the Cartwright Hall it takes 9min and buses leave every 10 minutes. If you get a day rider you could just fit this in with a normal day’s travel. Catch a 622, 623 or 626.

For more on 'Charcoal' 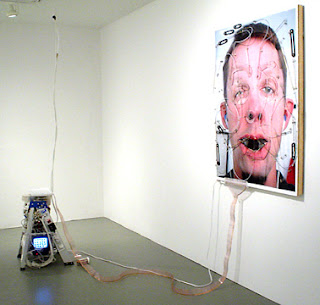 I had meant to put up a post about articulated collage when I was responding to the William Kentridge exhibition. He has made several films using simple articulated black card figures as the main protagonists. However I had not thought about how far you could take this basic collage technique until I found the work of Tim Hawkinson. "Emoter," consists of cut out ink-jet prints taken from photographs of Hawkinson’s own face and mounted on card, so that they can be jointed in such a way that when moved they mimic how Hawkinson’s own facial features move.  He has turned his own face into a machine that can take on any expression by combining all those little facial movements that we make when effecting face-to-face communication. However by making the whole face from cut-outs the work is slightly disturbing, especially as the face is over life sized. The machinery used to drive the cutouts also uses clear plastic tube linkages which give an almost clinically abject quality to what we are looking at. It’s in the articulation of small lip and eye movements, (see animation clips) that the work begins to move beyond what you might expect from this type of approach and it is when he gets down to such small details that he ensures that the work has maximum effect. 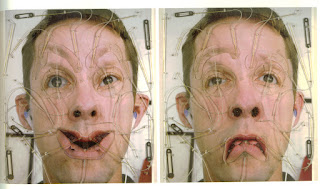 Hawkinson uses computer software to drive the machines that move his collage elements, but this could easily be done by hand. This might seem a long way from Indonesian shadow puppets but is essentially the same technique. Take some flat cut out shapes based on sections of the human body and link them together with a jointing system. 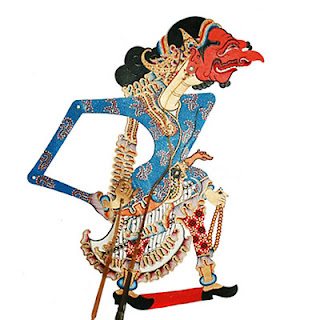 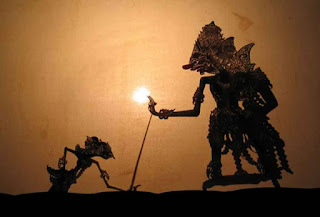 Both William Kentridge and Kara Walker have made use of the flat black card cut-out technique to create short narrative films. Working this way can make for a very powerful and emotive experience for the audience. 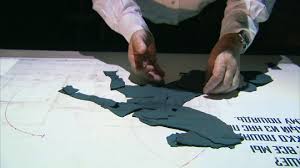 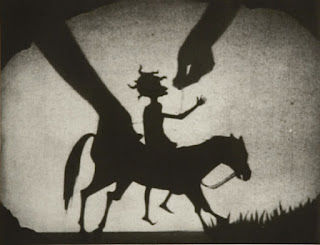 You can find a video of one of Walker's projection pieces here.

The issue here is that a very old technique, (the making of flat articulated human figures), can always be revisited. However the way an old technique is approached and received by a new audience will of course depend on the factors that shape a society and the technical climate that it exists within. In a time of social media and the prevalence of the 'selfie', how could these techniques be used to make people more aware of issues such as the fragmented nature of the current political climate, or the rise of Islamophobia?

Shadow projection does not of course have to be done using cutout articulated figures, it can simply be a light projected one an object in such a way that its shadow is projected onto another surface. It can be done in a variety of ways, a very simple thing to do is to make a projection beam pass through a group of moving figures, such as in Hans Peter Feldmann's; "Shadow Play". 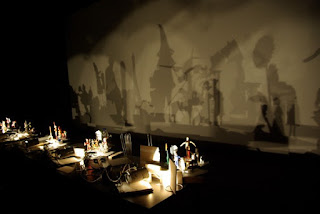 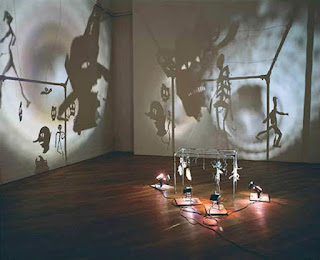 In Boltanski's work the movement is simply the swinging motion that you get when you hang things from a frame. The heat from the lamps causes air currents that ensure the shapes are always moving. 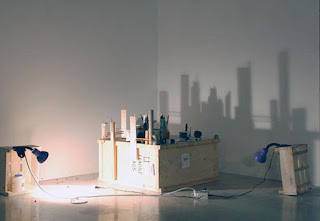 Alakbarov's technique is very simple, as you can see it doesn't take a lot of ingenuity to come up with interesting images once you have set up your light source properly. Why not stay late for a couple of evenings and try using an OHP or any other light source to make a shadow world? Make sure you photograph the results really well and the next morning in the  fresh light of a new day re-evaluate what has happened. This old technique is very powerful and would have been used by cave artists to great dramatic effect, so don't dismiss it as child's play and only worthy of making rabbit and crocodile shadows to entertain the children at bed time. 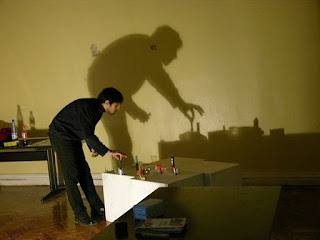 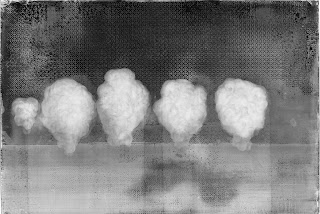 I have looked at graphite as a drawing medium in an earlier post, but like all pigments graphite powder can also be dissolved in resins, oils and mineral spirits. Christopher Cook makes his own graphite substances which work more like lubricants, a role that graphite has often taken when used in metal casting, as it was used to lubricate the inside of moulds. 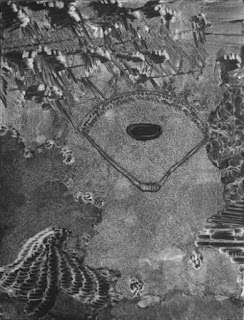 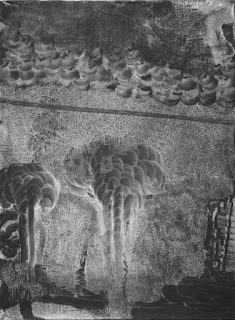 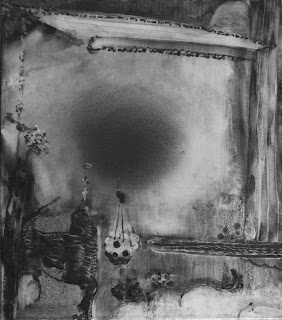 Cook uses his graphite in a similar way to certain mono printing techniques. Degas in particular used to work on glass plates with ink, rags, brushes and turps washes, in order to explore the potential of ink’s liquidity and ability to suggest forms by playing with the way light and form could be suggested by scumbling, stroking, washing and rubbing into the surface. 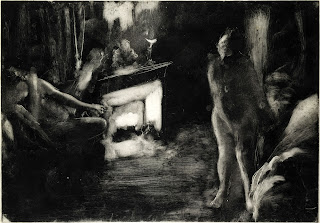 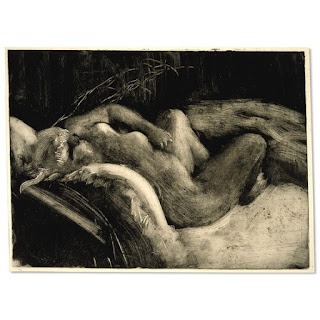 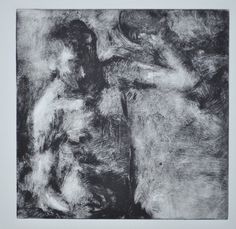 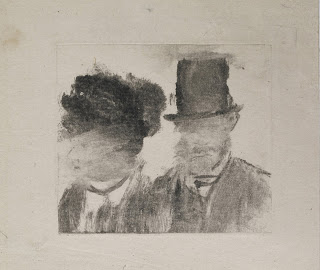 All you need to make mono prints like these is a sheet of glass or plastic, some oil paint, some rags, turps and brushes, then if you put an image underneath the glass sheet you can see it as you move the ink about, but not well enough to be restricted to copying the image below. It's a great process to use if you are trying to simplify an image and at the same time add atmosphere and painterly qualities.

There are some how to do it videos online.

A good introduction to tools and textures and working on a plastic sheet.

Drawing on the back of the paper mono print process

For those of you thinking about making post graduate applications, professor Stephen Farthing, Rootstein Hopkins UAL Chair of Drawing has made a pedagogic film featuring a brief introduction to how postgraduate students across a range of UAL colleges and courses use and apply drawing in their practice.