Writing today is nearly always done via a keyboard, in fact the ability to have skills in cursive writing is no longer a requirement of the United States' school system. Cursive writing is in effect for many young people asemic.

Asemic writing is a form of writing that sits between expressive mark making and language invention. The word asemic means "having no semantic content", or "without the smallest unit of meaning", therefore it is writing without words. What is interesting to me about this definition is the tight association between the concept of words and meaning. In effect, this definition suggests that if a language has no words it has no meaning.

Roland Barthes used the word 'asemic' initially to describe a typographical error, whereby a new word came into being that had as yet no meaning. Such as 'meaming', a word that must occasionally come into being if only because 'n' and 'm' are next to each other on a QWERTY keyboard. Derrida on the other hand used the word 'asemic' to refer to what a typographer would sometimes call 'furniture'. Furniture was initially a term for pieces of wood that were lower than the height of the face of the type. They blocked out empty spaces and were gradually replaced by type metal as the type faces themselves became cast rather than cut from wood. Many years ago I used to have to introduce typography to foundation students wanting to study graphics, we used a metal frame, a 'chase', within which we would spend hours setting out words letter at a time and creating white spaces by locking in 'furniture'. The key issue was how different spacing would effect meaning. Would the text be ranged left or right or should it be centred? How much space was needed between lines? Could certain letters be made to be further apart? (kerning). All of these decisions have now been transferred to users of word processing software on computers, but the memory of their physical nature still remains in the way you can still format type on screen. Derrida's point was that all those decisions about a word's surrounding space had meaning, but the meaning was not residing in the words as such, but how the words were arranged. Because he wasn't a typographer he didn't point out the fact that there was a whole profession that understood this and had a refined understanding of how space, organisation and layout of texts effected meaning.
Graphology or the science of reading handwriting has also existed for many years and it has been accepted within that profession that changes in mark quality and direction in the construction of hand drawn letter forms creates meaning of some kind. The graphologist Eugen Peter Schwiedland invented a graphometer, so that angle of mark could be more precisely measured and linked to personality type.

Signs of signs was something that I was at one time interested in because of what has been called in theoretical circles, the 'semiotic turn', whereby the focus on meaning was very much to do with how various languages worked. The dialogues set off around this type of understanding were very much to do with an analysis of the relationship between signs and their referents and the difference between signs, symbols and icons. By producing a range of these and each time using a different material, I felt that I was highlighting the importance of a material language that was also shaping its own meaning alongside that of human communication systems. 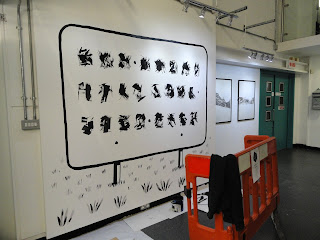 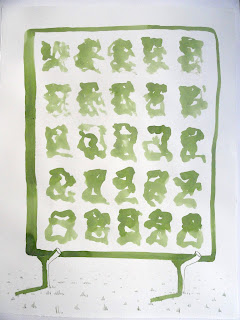 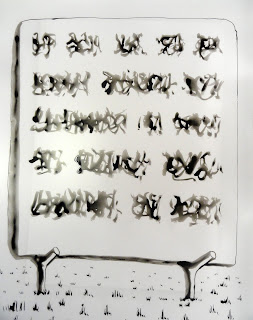 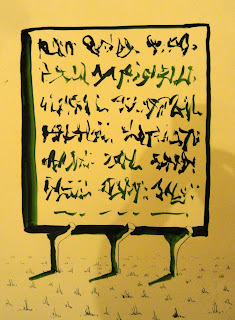 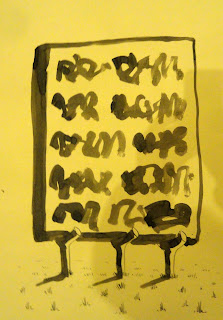 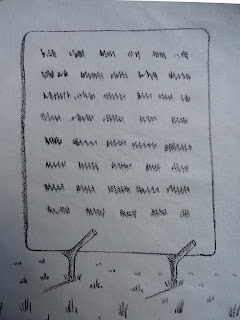 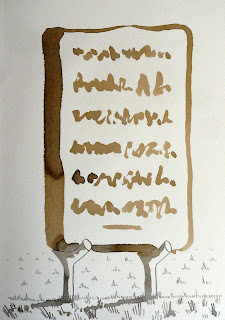 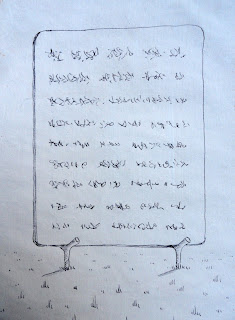 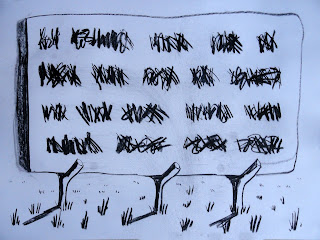 Asemic signs
The images of signs above were designed to be 'failures'. There is no way that structurally the Y shaped supports could hold up the signs, the signs for grass make as much sense as the signs for text, and like the signs for shadows as signs of three dimensionality, all are in effect lies or falsehoods, the only language speaking a truth being the materials used in the making of these images.
Asemic writing has also been defined as a hybrid art form that fuses text and image into a unity, thus setting them both free to an audience's arbitrary subjective interpretations. If I accept this definition, I think it sort of lets me as an artist abdicate my responsibility. Of course to some extent every communication with another individual is open to subjective interpretation, but we usually try to overcome this by working hard to clarify our message. Paradoxically, looking back on this work now I see it as being overly theoretical, a too straight acting out of an idea, therefore in effect illustrating a point, rather than discovering something new. The idea was in effect too clear in my own mind. It is the difference between 'living in the moment' of a work and working to a plan. I could have written out what I was going to do and it would have been enough.
Coda

Asemic writing doesn't signify anything but itself. This can be thought of like a form of ghost writing, a text aspiring to become a ‘presence’ or thing in its own right, rather than a form that carries significations of other things. Ghosts are often in fiction aspiring to the reality that living life forms have, and if we are not careful they might supplant the living.

Any inscription that is still legible, but perhaps only faintly, is like a ruin of its former self, a phantom presence. This ruin can however be a powerful form in its own right and signify a silenced voice.  Its past form can overcome its present one, especially if its erasure wasn’t just a consequence of normal wear and tear, but was the result of a deliberate attempt to remove it. This can often be the case with graffiti, especially if it is politicised comment or a sign of struggle.

Erased or cleaned off graffiti can also be thought of therefore as a type of palimpsest. One text is removed to make way for another, but in a future time, the first text may re-emerge and become more important than the text that replaced it.

Patrick Ford has highlighted for me how these issues relate to the political graffiti that has appeared all over the city of Hong Kong and of how inexperienced government appointed cleaners after doing their work, left recognisable 'ghosts' of the slogans used.  The erased text being still clearly legible to locals residents, even though the offending words or characters had been cleaned away.

As the cleaners would use solvents to try and remove the messages, the ink or paint used was partly dissolved, thus creating a delicate wash effect not too dissimilar to traditional Chinese ink painting. In effect the process of cleaning was developing an aesthetic 'look'. Patrick also sent me a link to the artist Serene Hui Sze-Lok, who has written about this issue in an Amsterdam Alternative article, and who points to that fact that these drawn marks now bear witness to the writing and un-writing, of the city’s memoir. 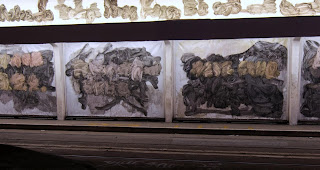 The word "palimpsest" means to be scraped clean and ready to be used again. In medieval times Vellum was so expensive that old texts were often scraped off, so that new ones could replace them; therefore the original palimpsests were made as a matter of economy. However the removing of a text can also become a political act, even if it was not seen to be so at the time. Sana’s palimpsest, one of the oldest Koranic manuscripts in existence, has been carbon dated, and its new date indicates that the under-text or ‘scriptio inferior’ could have been written 15 years before the death of the prophet Muhammad. However it differs from the standard Koranic text as completed in about A.D. 650, under the direction of Caliph Uthman ibn Affan, the third leader of the Muslim community. Muslims believe that the Koran they read today is the text that was standardised under Uthman, and regard it as the exact record of the revelations that were delivered to Muhammad. A variant reading could be seen as a threat to the authenticity of a sacred document, therefore the ghost of an earlier text, when it emerges, could be thought of as a threat to religion.

However we can also regard the idea of the palimpsest as a metaphor.  Thomas de Quincey describes our brain as ‘a natural and mighty palimpsest’, he points to ‘layers of ideas, images and feelings, each one as it arrives burying ‘all that went before’. Once thought forgotten ideas and feelings are as de Quincey says, ‘not dead but sleeping’.  More recently the term ‘palimpsest’ as we have already seen has become a metaphor for describing the city, both its physical form as well as our collective memories and experiences of it. The concept of the palimpsest is a way of thinking about the transformation of a city, new structures existing alongside old ones, as well as new life stories being written upon existing ones. Hong Kong is no different to any other city, however its present situation is more urgent, and we can see change happening in real time as the Chinese government tries to force Hong Kong to become integrated fully into the Chinese state.

More thoughts on drawing time More thoughts on graphology and a graphometer
Drawing with words
Eye music
Wits Breath Edion A photographic memorial to the street texts of Chapeltown
Graffiti thoughts
Posted by Garry Barker at 13:00