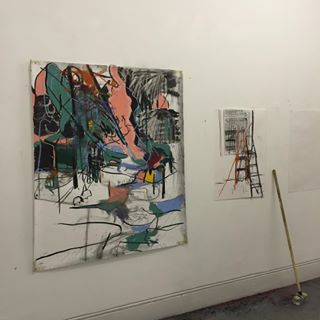 Josh Armitage is the new artist in residence at the centre for recent drawing. See
He is in residence 15 - 29 January 2016 and there will be a reception 6-8pm on the 29th of January if anyone happens to be in London and wants to see how things are progressing.

This is the C4RD statement about his work:
'Josh Armitage's practice has a firm foundation in drawing and animation, expanding over the last two years to include painting. It is Josh's intention during the residency to make a series of large-scale drawings and use this as the basis for his work throughout 2016.
Armitage is influenced by the ideas of artists Henri Matisse, David Bomberg and Roy Oxlade. When drawing, he says his aim is to discover something new. The discovery might be the drawing itself, marks within the drawing, shapes, textures or an idea brought forward by seeing the drawing. If he were to have a complete idea of a drawing in his mind and complete control while he produced it, then for Armitage would be nothing left to discover. Observation allows Armitage to overcome this problem; allowing observation, the observed subject and the process of drawing as integral to the generation of the drawing'.

As always I'm interested in how drawings arrive and so this sentence in particular caught my eye, 'the observed subject and the process of drawing as integral to the generation of the drawing'.

Below are some drawings done on the residency. 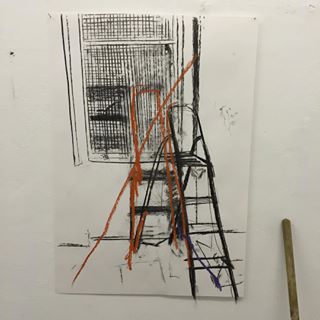 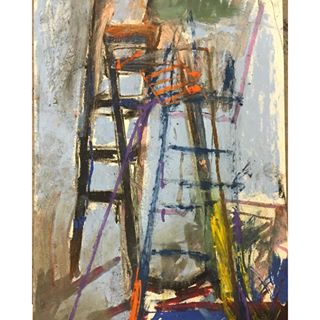 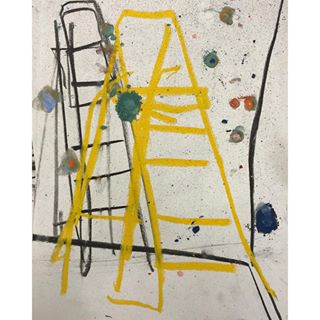 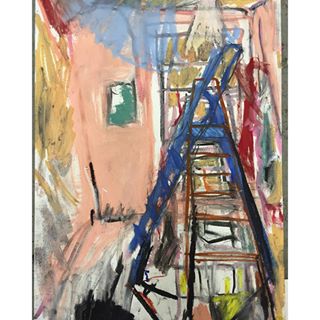 There is a straightforward simple exuberance about these drawings that remind me of how enjoyable just making a set of marks in response to what happens to be in front of you can be. Step ladders are always good to draw they exist as a 3D beginning of a grid, as soon as you begin to draw them they start to make interesting structures. You can see Roy Oxlade's influence, Armitage is prepared to just let the marks and lines happen and isn't worried if a mark looks 'child-like', in fact he celebrates the  freshness of any drawing that appears to just arrive out of thin air with a 'rightness'. I would suggest that perhaps the yellow stepladder is closest to Oxalate's temperament, and Armitage has left this alone, obviously feeling that as an image it makes enough of a statement. Compare Armitage's drawings with Oxlade's below. 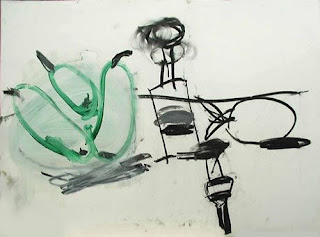 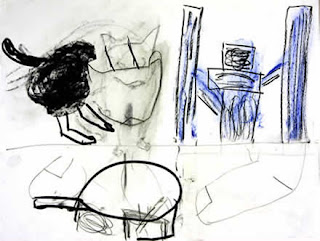 The drawings of David Bomberg and Roy Oxlade point to a fascinating but short lived moment of English art education. Oxlade was briefly a student of David Bomberg and therefore he would have been very aware of Bomberg's teachings and the idea of the 'spirit in the mass'. Bomberg had developed a situation around which a small group of artists were drawn, all of which were facinated by the fact that “there is no finality to any form ultimately – everything we see, touch, or know, can always be something else.” This constant re-engagement with looking was at the core of what Bomberg was looking for. Each and every time a drawing was made it was a re-discovery of what it was to look and at the core of this process was a discovery of how something was seen in time. This was 'the spirit in the mass'. Bomberg was very influential on a whole range of British artists, in particular artists who were centred on how to record the awareness of the perceptual dance associated with looking at the world. Cliff Holden, Leon Kossoff, Frank Auerbach and Dennis Creffield were all members of what was then known as the Borough Group. (This was in the late 1940s early 1950s).
It's interesting to see that this tradition is still seen as a worthwhile pursuit. For some time more conceptual approaches to drawing have held sway, but I have recently seen a return to 'looking' and perpetual questioning. Of course all looking is to some extent conceptual and even the most cool conceptual work involves perception, so there are no hard lines between the two approaches, but the balance shifts and perhaps each time a concept is revisited, something new is brought to the table.  In Armitage's case I would suggest there is more of an awareness of performative approaches. Drawing as both a performance and as a record or documentary of performance action has been of much interest over the last few years and artists currently practicing are therefore, even if not themselves overtly dealing with performance, aware that contemporary audiences 'reading' drawings, often take performative issues into account.

Email ThisBlogThis!Share to TwitterShare to FacebookShare to Pinterest
Labels: Bomberg, exhibitions, spirit in the mass