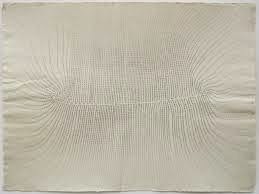 The artist's talks yesterday were very interesting. In particular Frances Richardson made some interesting comments about her work as a sculptor who has found a drawing language  that is at times clearer than her sculptural language.
Her concept of drawing as thin sculpture and her association of 'graphine' with graphite, were indicative of the way a sculptor could come to drawing as a way of thinking about materials.
If you go to her web-site the fact that she entitles the section where you will find her drawings 'works on paper' is indicative of how she thinks. These are drawings about paper's material properties, and could just as easily be called 'works using paper'. If you go to her web-site to look at the drawings, you will be able to see how important the physicality of the paper is to her. The mould-made paper she uses has an 'organic' or 'deckle' edge  and makes each sheet of paper more object-like.   See also post of 8th Nov 2014 on paper edges.
She uses the graphite's ability to respond to touch very sensitively, the fact that you get a tonal change as you increase pressure on the pencil or graphite stick is an obvious physical attribute of this process, but to control this over a large surface area and with so many marks takes a long time of concentrated effort. As Frances Richardson pointed out, just one mark made with the wrong pressure and the whole effect is destroyed, because that one mark will pop out of the spatial co-ordination and harmonisation that has been developed. Some drawings work from very delicate marks in their centre which get darker as they approach the edge and others begin with darker marks on an edge and as they work their way down the drawing, the marks fade out. The marks themselves are composed using the signs + and – . As marks they are manifest in various densities of graphite. Richardson has previously stated that they are a “ a conceptual preposition, the presentation of the moment of being in space and time: a pulse that tends towards nothing and everything”. She also describes the work as a gestural act: “drawing is a point of touch, an action that marks the intangible physical reality of being in a moment and a suspension and presentation of this moment to the viewer.” The idea that the drawings are about gesture and touch, reminding us of the physicality of making, which reinforces the fact that all human made objects are in some ways frozen memories of their construction. I was also interested in Richardson's titles for the drawings. I didn't get a chance to ask her but I presume that titles like ''290208' refer to the number of marks needed to make the drawing. If I'm right, this further enhances the awareness of how time is invested in their making and the concept of objects being frozen memories of their making.
These are very simple and direct decisions about material properties and material placement, again reflecting Richardson's sculptural interests. 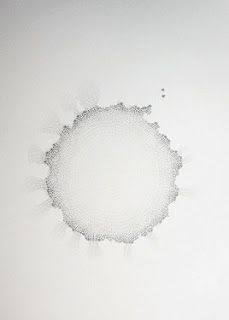 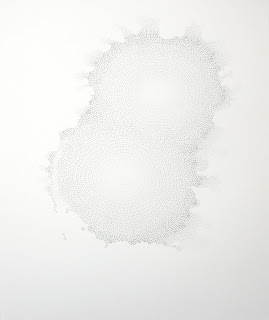 You could think of the broken edges of the drawing above as if Richardson is thinking of a shape being 'carved' away, her earlier apprenticeship as a carver in Nigeria, still affecting her decision making, even if now quite sub-consciously.

The process of drawing and how drawing can be thought of has paradoxically begun to shape the way she begins to think about sculpture; describing her more recent sculptural work as "drawings for sculpture". The fact that in these works MDF is shaped to resemble bent metal I beams, reflecting the fact that drawing is traditionally used to represent how a material object might look, the drawing 'standing for' an object. It was interesting to hear that Richardson also works for an architectural practice, so must see a lot of drawings meant as visualisations of what would eventually be solid buildings.

Richardson has also described her sculptural works as “walk-in drawings”. She has stated that the intent with these works is that the viewer, does not stand apart regarding an object, or enter into an installation, but becomes part of an imaginary field within actual space. In this field structures; I-beams, tables ladders are “drawn” using MDF.


It's always revealing to hear artists talk about their work, and in Richardson's case she was particularly open about the way life events could help shape what you were eventually going to do. By beginning her talk with images from news footage that came out during the time she was growing up she was able to ground her practice in life events. This is something we can all do, not to point to these moments as actual known 'shapers of our destiny' but as things that may well have contributed to our unconscious or 'tacit' knowledge of the world. 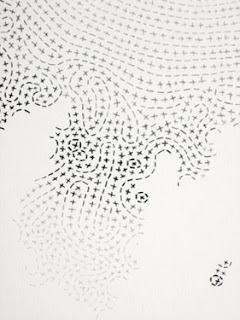 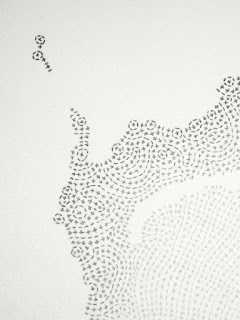 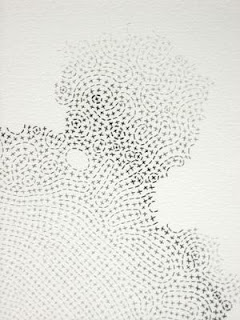