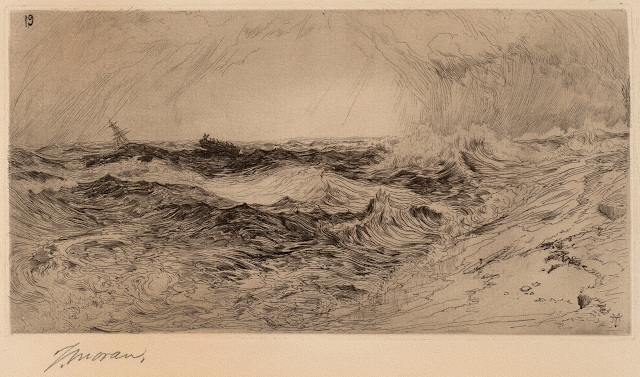 
One area of drawing I have had to think about quite a lot over the last year has been how to draw water. This might appear to be a pretty basic question but the more I looked at it the more interesting the answers became.
Water is hard to draw simply because it rarely comes in still forms that allow you to take your time to draw it. Therefore what you have to do is stare hard at whatever form it is taking and as you look, you need to break down what you are seeing into manageable visual chunks, so that you can memorise them. Then as you draw you also need to keep looking back at the water in order to re-check how your static visual invention is stacking up against the reality of constant movement. You are inventing a way of freezing movement and yet making it feel as if it still has movement within it. This is something a photograph can't do; it can freeze the moment, but it can't reinvent the experience by developing an equivalent experience.
Leonardo was fascinated by water, in particular the way it moves and he made several studies of twisting flowing water in motion. 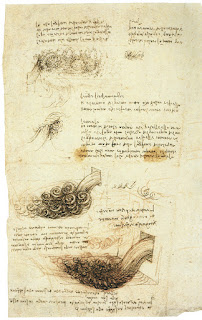 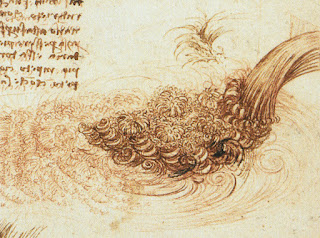 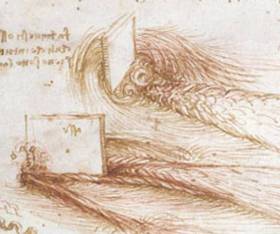 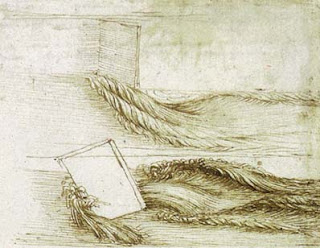 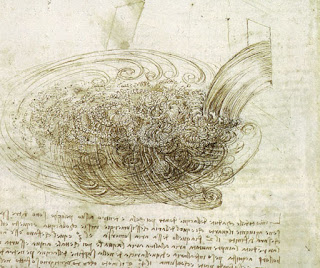 These are the sort of drawings you could do yourself simply by watching how a running tap creates eddies and flows in a wash basin. What is particularly interesting is the amount of formal invention Leonardo has to do in order to get his ideas across about how water operates when it moves. It's still worth trying to draw this type of situation, because there is no 'right' answer and because the task is so difficult the experience will force the drawer to become inventive and to come up with new marks and inventive forms based around their own particular interests and proclivities. If you look at the work of Leonardo as a whole, you will find very similar curves occur over and over again. His obsession with movement and energy producing a language of sprung curves that he began to see everywhere. Perhaps by trying to draw something that is virtually impossible to actually see, what happens is that what you finally draw is an illustration of your own thinking process.

If you  look at the drawing by Thomas Moran at the top of the page, at first sight it appears to be a very ordinary drawing of the sea, but on closer inspection you realise that he has invented a wide range of marks in order to capture the variety of water movements that you see when you stare at sea water in movement.

Different types of water require different types of visual languages to portray them, David Hockney has at various times in his career returned to water as a subject and his own invented graphic languages tend to revolve around spending a lot of time alongside Californian swimming pools. 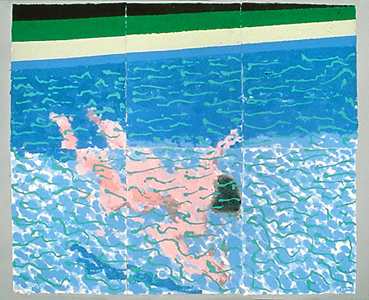 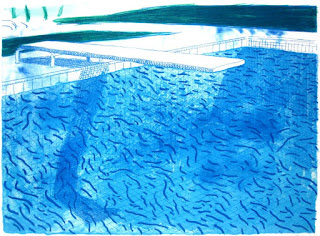 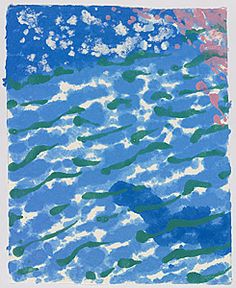 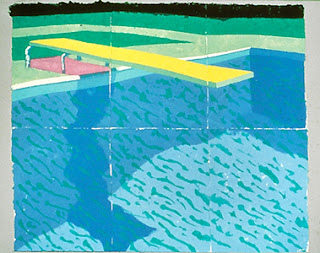 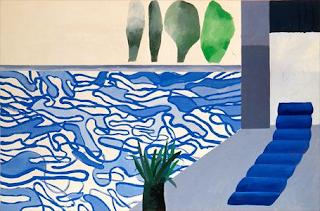 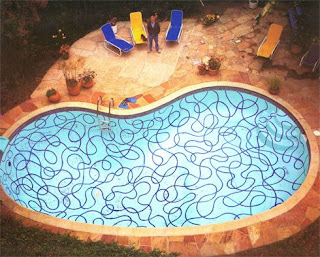 Hockney: Design for a swimming pool


The final Hockney swimming pool image is of an actual pool designed using his graphic language, thus bringing his watery graphic concept into some sort of circular closure; or in this case more like a peanut enclosure.

Sometimes it's useful to examine one selected part of an image so that you can see how an artist has responded to the problem of how to depict water. The artist Joss Judd has created an almost oily water surface in this detail from one of his drawings. 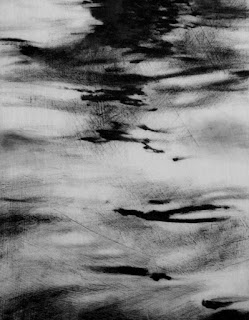 You can just about see that he has prepared the surface before applying charcoal, the traces of brushing and sanding can be seen picking up particles of dust, thus adding to the textural feel of the water surface. The way that water curves and reflects light is very well captured in this drawing, the fact that there was also a dark figure standing in the water of course added an additional narrative but what is important to consider in this case is how effective the drawing could be when just the nature of water's appearance is explored. 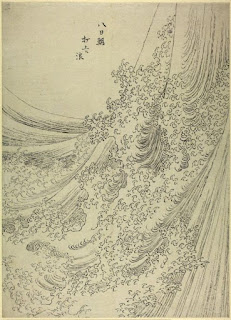 The great Japanese artist Hokusai drew water many times and several prints were made from his images. He was particularly adept at creating rhythmic linear compositions that could freeze a dramatic moment and catch the essence of the delicate balance between wave power and water froth that you see when a wave breaks.

I've had to develop a graphic language to represent sea water myself for a series of drawing I did recently.

A few seconds of a recent animation using pen and ink. 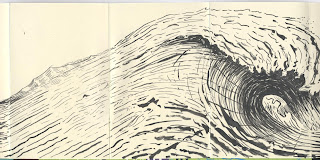 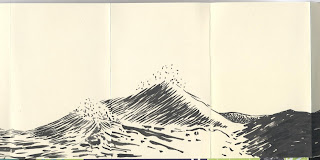 The drawings above explore directional mark possibilities, drawn using ink and brush, there are several aspects that you need to control at the same time, such as weight of mark, clustering of marks to achieve various tonal values, mark energy, shape and direction. 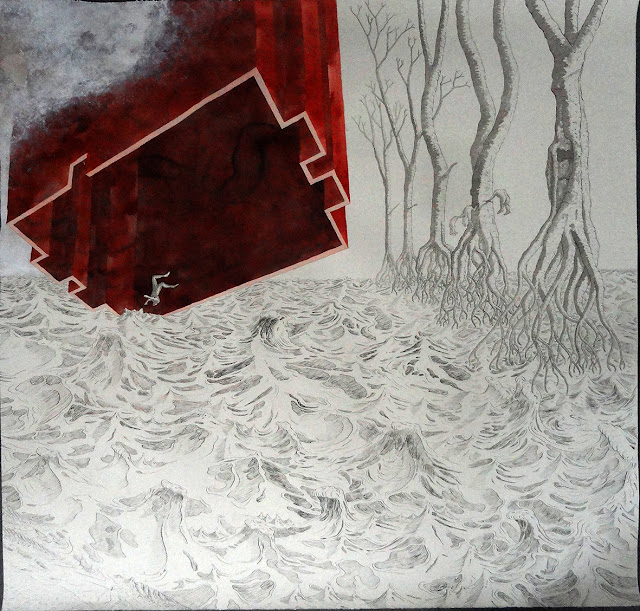 This more completed drawing above, has a large section devoted to an invented sea. Without spending time drawing water and trying to develop marks and shapes to stand for the various forms it takes, I would not have been able to invent my way into making a sea that could work across the surface of the image. This is not about copying from a photograph and if you look at what I have come up with, just like the Leonardo images of moving water, the image is not at all like the frozen instance that can be recorded in a photograph. Sea never actually behaves like this, but of course a drawing can never be 'like' reality, it is always a fiction. The job of the artist is to make it a convincing fiction, and fictions are only convincing if they have some sort of awareness of reality built into them. If this element of my drawing works, the lines and marks create a constantly moving field for the eyes that can simulate the experience of looking at the sea moving.

I became fascinated by the various ways water could be drawn after looking at a variety of drawings of Saint Christopher. As he is always depicted walking through water, artists would draw the water itself, as well as some dealing with the fact that water is also transparent, because they wanted to show that Saint Christopher had his feet planted firmly on the ground, as he had to be able to provide a solid support for the young Jesus Christ as he carried him across the river. 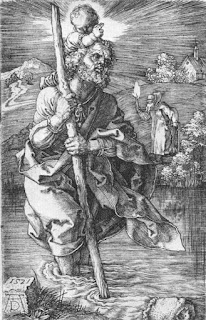 Look at the way the folds of Durer's wind blown cloak are blown into cloud like forms, in many ways this image of St Christopher is a depiction of earthly matter transforming into spiritual form. In the image below the cloak has taken on an even more substantial form, threatening to overpower St Christopher himself. Matter becoming energy or spirit being central to this myth. 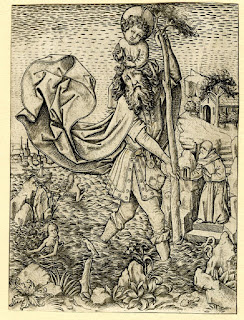 If you turn this image upside down, you can think of the marks that represent the sky as also been capable of representing a sea.

The woodcut directly above particularly fascinates me, not just because of how the water is depicted (you can see a direct visual link between this water and Hockney's) but how size constancy has been played with and how the artist has applied a process of simplification to all the elements of the story, as well as providing space and room for textual commentary.

Water is of course one of the 4 elements. Earth, air, fire and water were seen for many centuries as the fundamental building blocks of our universe. Water is deeply woven into our mythic consciousness, indeed in some ways Earth should have really been called Ocean, as water covers far more of the world's surface than land and water is essential for the creation of life as we know it.

What can start with basic observation, can be deepened and given resonance by looking at how artists of the past have depicted it and then it can be further enriched by research into how as a subject it can operate mythologically, historically, chemically, physically etc. etc. Above all drawing things that are insubstantial, moving and impermanent suggests that what the drawer is trying to do is to meditate on life itself.
However time spent drawing flames is very different to time spent drawing clouds, each of the 4 elements has a different relationship with the ever changing reality of existence and the unique character of these things can be seen at some level to be not unique and to be simply about the fact that everything can at some level be reduced to changes in vibrational energy. 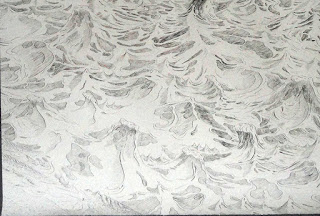 Shapes of the sea

The drawing by Vija Celmins is of course done directly from a photograph. Her image is playing upon the idea that something captured in a tiny fraction of a second is now laboriously copied. My own drawing of the sea below it is very obviously an invention of what a moving, swelling sea could be like. Neither is 'right' and they are both in some ways a meditation on languages of representation.

Some other related bits of random information:


Visit Project Gutenberg, download and read 'On the Laws of Japanese painting'.  There is an interesting section on drawing water using ink and a brush; a small part of what is a fascinating read.


A good read in relation to this post is 'Drawing Water: Drawing as a mechanism for exploration' by Tania Kovats. In this book she opens out her interests in both the sea and drawing in a wide range of formats and approaches, in particular she opens out how we can think of drawing as exploration, both physically and metaphorically.