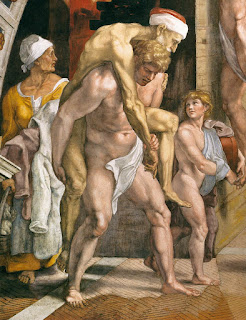 During the Renaissance the word ‘disegno’ was used as a term to cover both drawing and design. In Florence ‘disegno’ was seen as essential to the beginning of any artistic activity, be this sculpture, painting or architecture. Therefore it could be argued that painting in Florence was essentially coloured in drawing and the main technical process for Florentine painters was fresco painting, which needed a cartoon to be drawn out first, so that a drawing could be transferred to the wet plaster. However in Venice there was a different story emerging. ‘Colorito’ a term that meant both colour and its application was seen as fundamental to giving the ‘look of life’ to painted images. Venice was surrounded by water, therefore it could get damp and dampness was the enemy of fresco painting. Because Venice was a maritime power, it had large supplies of huge canvases that were used for sails and these were ideal for making surfaces to paint on, therefore a very different way of painting evolved. Venetian processes of the layering and blending of colours involved not only new ways of painting but different brushes and the evolution of painting on canvas led to another way of thinking about colour and image. Instead of colour being seen as what you filled in between the lines, it became a structural principle in its own right. Instead of beginning with drawing, Venetian painters often worked out compositions directly on the canvas, using coloured brushstrokes rather than line to define form.

Drawing and colour have therefore a long and interesting association. Can you draw with paint? If so is this drawing or painting? Are all paintings that are planned out as drawings in advance, really coloured drawings?

It is interesting to compare a drawing by Titian the great Venetian colourist with a Florentine master of the same time.
Titian is used to finding the form directly, using the activity of painting to discover the figure. Therefore his drawings are not plans for paintings but exercises in discovery, the drawing below shows him thinking about dark/light balance, as in a ying-yang symbol. He is finding through the markmaking, you get the feel of this being a drawing by someone who thinks through a brush. 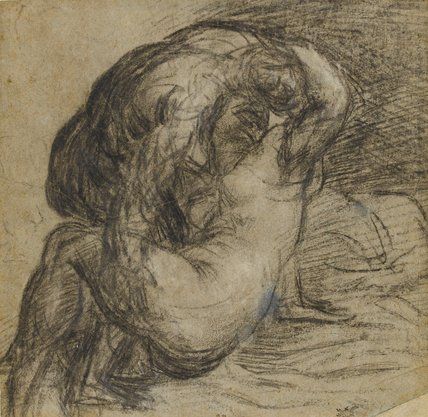 In contrast Raphael makes drawings that can be traced and copied onto cartoons and then transferred. His images are clean cut, sharply defined and exist as plans for paintings. You can see the relationship between Florentine drawings and paintings by comparing the drawing below with the detail of a painting at the top of this post. 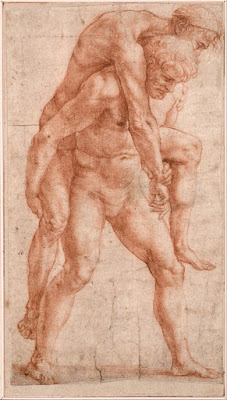 David Rayson’s work is centred on what he has called The Everyday Fantastic, or “a soap opera with no text”. He uses basic computer drawing programs and cheap felt tips to draw those bits of the city that no one loves. Underpasses, bits of scrubland, the backs of housing estates, are all drawn or printed in such a way that the medium and the subject conjoin to give form to an idea of an awkward beauty, something on the edge of ugliness, something a long way from Raphael's ideal of the perfect human body and Classical composition. Rayson however still has to consider the relationship between drawing and colour. 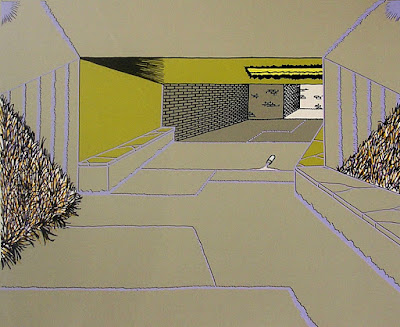 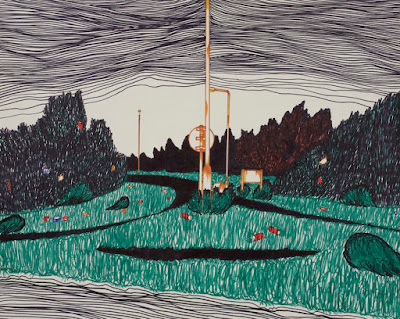 Colour and drawing combine in Rayson’s work to give the effect of raw urban experience. There are no soft niceties in this colour palette, the marks are akin to scribble, or colour is simply just filled into areas, but this is an attempt to get at the essence of what the images are about, and felt tips and cheap computer drawing programs are perhaps today's canvas and oil paint. The low toned yellows and vibrant violets in the underpass image suggest that Rayson is very aware of colour theory, and his images therefore hide their sophistication, like an Elizabethan Playwright writing for Eastenders.
Anna Bulkina in contrast uses colour in a very private intuitive manner. Her use of mono-print techniques means that at times her stained drawn images can blend gently into images that are very painterly. She is similar in some ways to Ken Kiff, but her colour sense being Ukranian is more Eastern European, you at times get intimations of Chagall. I don't think she is as consistent as Kiff but she is well worth looking at if you are thinking of working in a very private idiom, especially when telling stories about the potential of the domestic to become strange and fantastic. 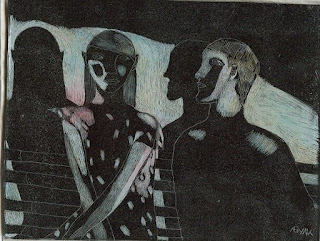 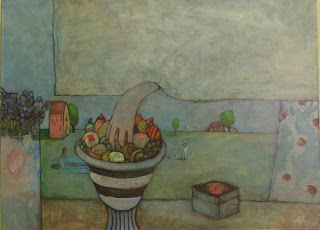 Someone working more in the tradition of Titian, is an artist like Betsy Dadd. She makes animations and uses a lot of mono-printing techniques, but essentially it could be argued that she is someone that loves drawing in paint. 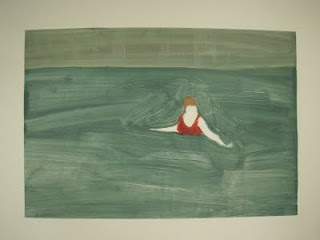 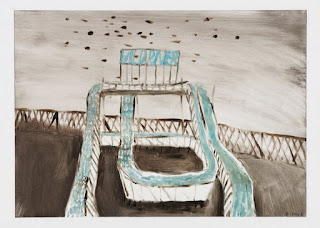 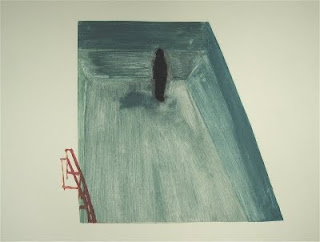 Betsy Dadd draws directly on glass plates and takes impressions from these in order to achieve the sense of a 'frozen' gesture. She would probably have looked at Degas mono-prints beforehand, Degas being a wonderful bridge between painting and drawing, his pastels (see earlier blog post) holding a delicate line between the two disciplines. If you look closely at the mono print of the figure standing in a swimming pool above, you can get an idea of how the mono printing technique helps her to control the image. The rectangle of the bath itself would have been created by brushing paint directly onto a glass plate. The sharp edges would be created by using a paper stencil to ensure a crisp edge and then the red ladder would have been applied later. Dadd's images evoke the melancholy of the city, they suggest the loneliness that can become the lot of many people drawn into a city of thousands, who by virtue of the harsh environment of late Capitalism, are forced to exist alongside the many but outside of the comfort and protection of family and friendship groups. 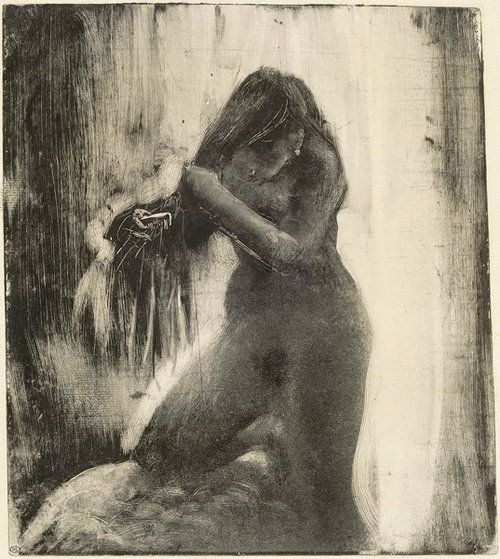 It's interesting to compare Dadd's technique with Degas'. He is wiping away the ink to get a sharp edge to the figure, and his brush marks are clearly revealed by the way the paper picks up the ink. Even an artist of Degas' stature has to scratch into the plate to dig out the form, look at how he has tried to clarify the arm by scratching a line around it, and he has had a very difficult time finding the right marks for the hand and comb. The image is being discovered in its making and that is what makes it so fresh and much more akin to Titian's drawing than Raphael's. Dadd's figures are much less substantial, they act as symbols of isolation, rather than flesh and blood people. Each time a technique is used it is rediscovered anew, each artist having to find a language to express what it is to be alive in their particular time and in their particular place. 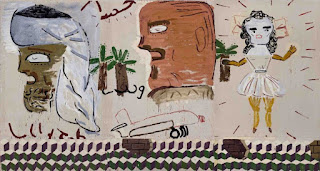 The artist Rose Wylie is someone who draws in paint. She belongs to the tradition that includes David Bomburg and Roy Oxlade, (see earlier posts) but has gradually developed a way of working that is perhaps closer to Philip Guston. It's wonderful to see her work now acknowledged. See

I started this post with an image from Raphael and now end it with one from Rose Wylie, and you may therefore think that the history of art has taken a steady downwards slide ever since the Renaissance. However I beg to differ. Rose Wylie is as highly trained an artist as Raphael was, she is a graduate of the Royal Collage of Art and in her 'naive' images there is much sophistication. The Pre-Raphaelites were called that because they wanted to return to a more spiritual and direct way of painting and saw the work of Raphael as being a dividing line between the pure, direct expression of Medieval art and the overly sophisticated and controlled manner of the High Renaissance. Artists have always sought to bridge the gap between the experience of life and the artistic lens through which life can be looked at. Rose Wylie like many other artists is seeking to find that 'spirit in the mass', that moment of realisation, that time of duende or an authenticity that helps us touch the reality of being alive, and in doing that she has my full respect.