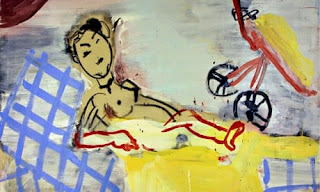 Oxlade's images are odd, funny, sensual, absurd and visceral. He didn't like French art  "The problem with French painting," he wrote, "is it all seems a bit Montmartre." I.e. it had become mannered and he was always in a battle with what he thought of as English insipidness. 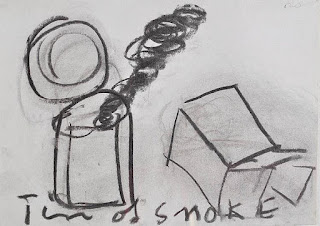 It is very hard to make a surprising image, the older you get and the more practiced and knowledgeable the easier it is to slip into tried and tested ways of making images. It is very hard to continually surprise yourself, but Oxlade in many ways achieved this and in doing so left a powerful legacy to those coming after him. Hopefully this is not a legacy in terms of how things look, or a style, but is a way of ensuring that art and life don't become separated. Life is surprising, odd, funny, horrible, tragic and visceral, is chaotic in nature and of infinite complexity and so why shouldn't art be the same? We have all at one time or another burnt the toast and thrown it in a bin, but how many of us have thought that it might be worth a drawing?

One of the best responses an image can have from an audience is, "That's daft", words that for me mean that something has happened to raise a question in someone's mind about the nature of reality. It might also be funny. Never under estimate the power of humour. 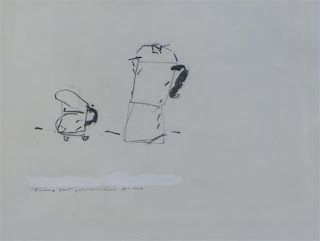 Roy Oxlade
Objects can be very funny, look at those domesticated thingies that hang around the kitchen, what do they talk about to each other when you are out? How do they appear to each other, what is the kitchen pecking order? Who knows? But it might be worth a drawing to find out. 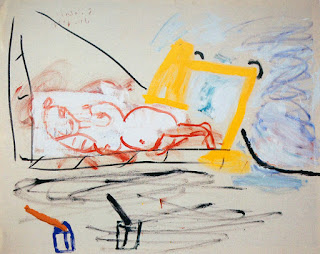 Roy Oxlade: The Yellow Lamp
On some days the light source is more lively than the model. Who has never gazed at the angle-poise lamp with admiration. Pixar have branded themselves with it. Oxlade I suspect surprised himself when he made the image above, an image that is indeed, 'daft'.

Rose Wylie lived with Oxlade for most of his life and painted her own surprising images that in many ways surprise us even more than his. 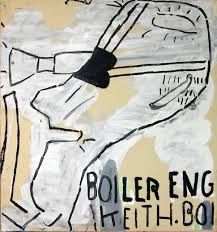 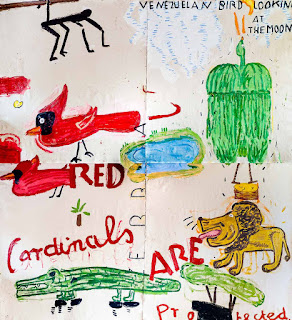 Rose Wylie
Rose Wylie still continues to paint and as she does so, she seems to be able to tap directly into scenes from her childhood and a freshness of vision that is childlike. (Not childish, I hasten to say). Some of her images are very large and it feels as if the very struggle to work on such a large scale is part of the awkwardness of the images, an awkwardness that is part and parcel of why they feel powerful and direct. However, Wylie like Oxlade can also become trapped in that loop that can catch any of us out. As you search for a childlike or raw vision it can become a style, and as the policeman said to the art student, "Remember style is the enemy of all art".

I saw some drawings by Nadine Fienson not long ago from her 'Sex Toy’ series. They had a freshness that suggested that she was trying to tap into things she was still finding awkward and difficult, like life. 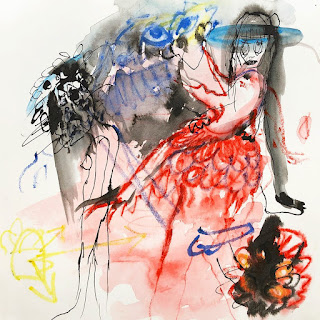 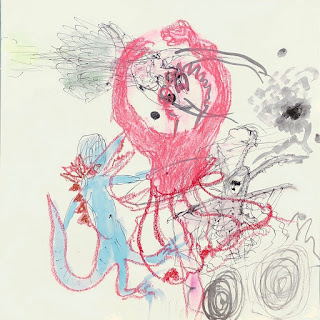 Nadine Fienson
I hope that Nadine was as surprised by her imagery's arrival as I believe Oxlade was. It felt like that to me, but that's perhaps because I'm also aware of her sophisticated ability to handle paint. 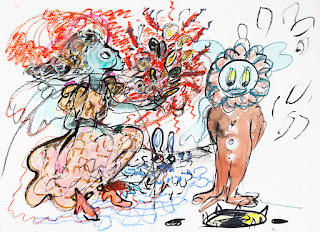 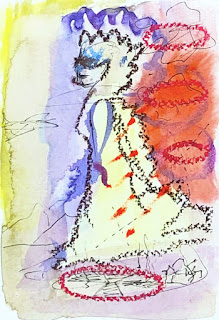 Nadine Fienson 'The matriarch'
Surprising yourself with imagery is also about allowing it to emerge by itself and sort of catching if off guard. It's a lot harder than it seems, which is why so many artists end up getting fed up with themselves. What they are annoyed at is their own fear of letting go. I still have that problem. I can sometimes look at what I have been doing and realise that I'm making parodies of my former self and when I do I need to stop, walk away and begin again. Some artists look for a style, my feeling is that as soon as you have found it you need to lose it. Having a style suggests that you are more important than the world around you, but reality is far more important than any one individual and it has no style. Style also suggests that things are predictable, and as we well know, life is not like that.
See also:
Josh Armitage
Images of the city (includes some thoughts on Bomberg, Auerbach and Creffield)
More on life drawing and David Bomberg's influence
There is a link to Rose Wylie at the end of this post on colour, she lived and worked alongside Roy Oxlade for many years.

Email ThisBlogThis!Share to TwitterShare to FacebookShare to Pinterest
Labels: drawing and life, raw art, spirit in the mass, surprising yourself, the raw image