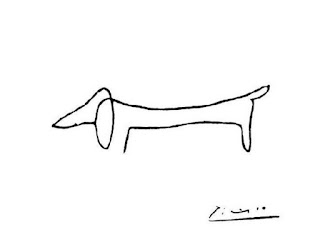 Paul Klee introduced us to the idea of taking a line for a walk and more recently Francis Alys walked the boundaries of Israel leaving a continuous green line of paint, both artists realised how powerful the idea of a continuous free flowing line is and how any breaks in a line can be used to signify a wide range of possible interpretations. The line was so important to Klee that the active line is figure one in the definitive edition of his 'Pedagogical Sketchbook'.

This is how Klee introduced us to his idea of a freely moving line:

'An active line on a walk, moving freely, without goal. A walk for a walk's sake. The mobility agent, is a point, shifting its position forward'.

Klee's line is reminiscent of another artist's attempt to explore a particular way of thinking about the formal qualities of line when trying to define beauty. Hogarth's 'Line of Beauty' also has a certain sinuous quality and is one not too far away from Klee's.

From Hogarth's Analysis of Beauty

Hogarth was concerned to direct our attention to the fact that nature, (e.g. the flower drawings 43 and 44 above) exhibits a powerful sinuous line in its various forms and that artists can extract this and use its qualities in their own compositions. If used appropriately this compositional device would therefore have the same curvilinear energy as found in natural growth and would therefore give 'life' to an artist's composition. As a compositional device it can be used with both large and small curvatures, therefore it can link overall compositional ideas into the way that details are dealt with. (See also) 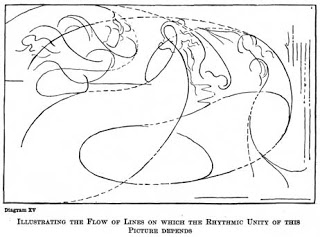 A moving line as some sort of representation of life links Klee and Hogarth's ideas together.

When you compare what Klee describes as; 'An active line, limited in its movement by fixed points', as in fig 6, you can see that a line moving freely, can be seen as a sort of line as dérive, literally a line 'drifting' along, as in fig 4.

(Debord defined the dérive as "a mode of experimental behaviour linked to the conditions of urban society: a technique of rapid passage through varied ambiances".
Klee's line that is limited in its movement by fixed points (fig 6) suggests a line controlled by other forces, perhaps the constraints of a powerful governmental structure that a drifting line would in effect question because it suggests an unconstrained movement, perhaps even a way of living outside of the normal constraints of society. This reminds me of the 1960s and the fact that I was a hippy once. I can vaguely remember a Dutch artist (I think he was from Holland) who used to make continuous chalk line drawings that meandered over roads and up the sides of buildings, simply lines curving about and crossing themselves without any form of restraint. At the time these drawing/performances seemed just right and reflected the ideas that were floating around of ways to find new approaches to things, ways that were not constrained by a generation that had experienced the discipline of war, ways that were about peace and love.

That free flowing street line was a chalk one, but the spray can as a free flowing drawing tool is perhaps the main reason a certain 'anti-authoritarian' graffiti style has evolved over the last 40 years or so. You have to move the spray can nozzle very smoothly and quickly if you are to maintain that flowing movement that is indicated by Hogarth, his line of beauty now conflated with another idea that of urban style and freedom. Graffiti has its own history and you can find an in-depth article that looks at the history and media specificity of the spray-can here. What I'm trying to get to is that a certain idea of line and life has been around for a while now and that it takes various forms and is as much a product of media specificity as conceptual reasoning. Shantell Martin is one of those artists that seem to have been able to carry their urban style into the world of gallery art, her lines on walls still curved and sinuous with echoes of Picasso, Matisse and Keith Haring. 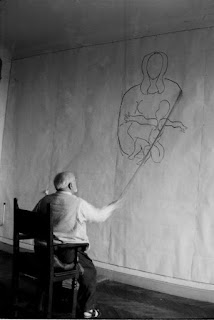 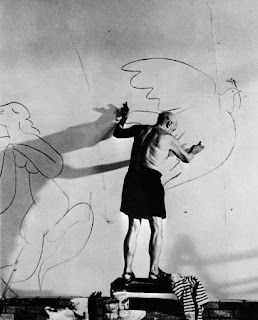 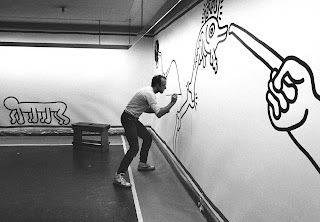 When you get to a certain size of drawing the line comes more from the shoulder and as it does it becomes more 'open' and 'embodied'. As with all hand done drawings, the energy flow moves directly from the relationship between the body's jointing systems and their smooth or otherwise articulation.

Tim Knowles takes another approach to continuous line drawing. His windwalk drawings use a GPS messenger system to plot his journeys which have been directed by wind direction. His strange helmets with attached weather vanes are an essential a publicly very evident aspect of this work, which is performative as well as being an aspect of documentary practice. 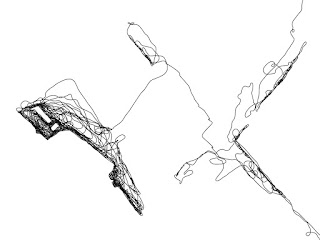 The image above shows "how as the meandering route of the windwalker [guided solely by the wind] collides with buildings, walls, railings, ventilation shafts, parked vehicles.... glimpses of the city's structure are revealed". Taken from: Tim Knowles' website.
In this case the meandering line literally reflects a sort of derive or wandering through the city. The fact that our mobile phones are constantly sending out information as to where we are at any given moment makes this type of technology much more central to our lives and I would suspect that computer drawings that follow changing GPS coordinates will be used more and more as ways to record our lives. If you are interested in this area you will need to begin exploring how to visualise GPS data and there is help and software around to do this.
A lot of work has already been done in this area; I am very fond of the series of GPS maps drawn by Jeremy Wood who has recorded the movements of a lawn mower each time it has been used to mow a lawn. It both reveals the shape of the lawn and the different patterns taken over time as the mower confronts the same task but goes about it in different ways. 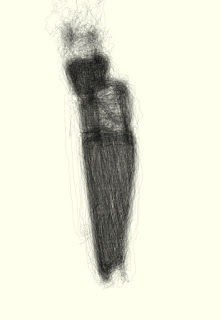 Those of you that are much more digital natives, (i.e. not myself) may well find that a GPS tracking system could be your sketching charcoal. I think it can be used in as subtle a manner as any other drawing medium, it just takes time and adjustment to bring out the best from this form of continuous line drawing technology. Even though these lines are made by a computer and printed off using a machine driven plotter, I still see a clear connection with Klee's "active line on a walk" and part of the fascination these drawings have is that although they are computer aided, at their core is a human being driving a lawn mower.

It is useful to compare this idea about flowing lines with earlier posts on the description of water. The artist Sonja Hinrichsen perhaps sitting between the two, her snow drawings are done both to reveal the meandering tracks of herself and volunteers and to represent the water in flow as it would be after the thaw. 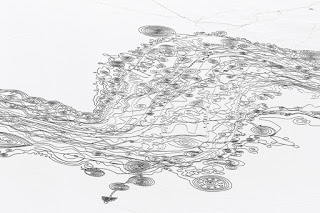 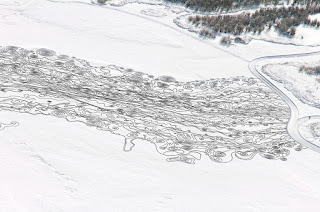 The flowing lines of Hinrichsen's huge drawings also remind me of images of microscopic life in sea water, viruses and human tears. When I see photographs of these things taken with electron microscopes, somehow they feel more like drawings than photographs, perhaps because they are captured slices of a world that feels as if it is coming into being. Life inside me is perhaps like this, I am made up of millions of tiny worlds like this, each one contributing to some tiny aspect of my vast lumbering whole. 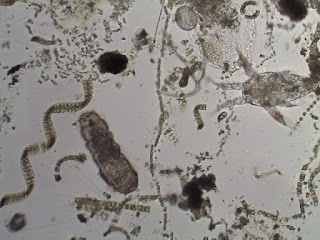 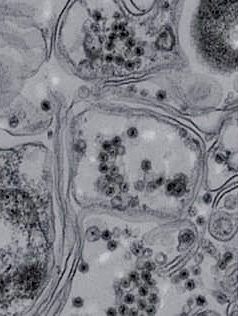 These traces of lines of life that Hogarth could never have had access to appear to exist at all levels of magnitude including the sub-atomic. These bubble tracks below are a beautiful example of the spiralling line at it most elegant. 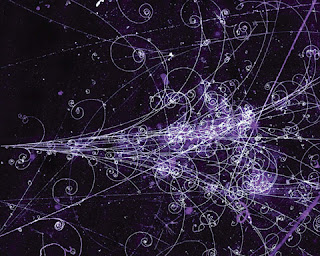 
But Hogarth was always predisposed to find lines of energy and grace in life itself, as he reminisces; "I never can forget my frequent strong attention to it, (the spiral) when I was very young, and that its beguiling movement gave me the same kind of sensation then, which I since have felt at seeing a country-dance; tho’ perhaps the latter might be somewhat more engaging; particularly when my eye eagerly pursued a favourite dancer, through all the windings of the figure, who then was bewitching to the sight, as the imaginary ray, we were speaking of, was dancing with her all the time". Lines and the dance, rhythm and movement, usually linked together with sound. 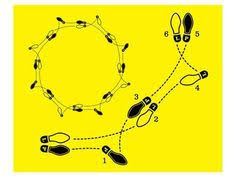 Dance movements
﻿
Flowing lines suggest flowing movements, flowing movements suggest a healthy body in action and here it is that we have life. Each drawing a frozen choreography of actions, each line open to be swallowed by ourselves as we endeavour to ingest the life force it holds, looking hard, we are moved to touch and once touched, we need to taste a thing to fully grasp its reality... 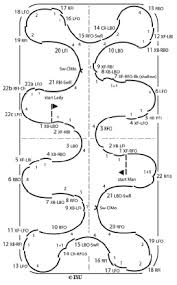 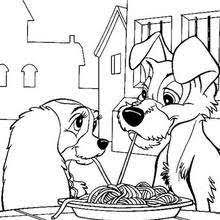 
our experiences of being in the world can be very linear.

Most of these things can be brought together in performance practices, for instance Heather Hanson brings together dance and drawing as she choreographs and transfers her movements onto large sheets of paper. Whether this is contemporary dance or drawing doesn't matter, it does though remind us that all drawing is in some ways a bodily performance. What a mathematical addition to a computer drawing program such as the use of Bézier Curves can do is add to the smoothness. No jerkiness is to be found in a Bézier Curve, see this earlier post, but perhaps the maths can be 'questioned' if the program can be blended into a performance. This 'performance' is for instance driven by code, but as code is written this itself is a type of performance. The breaking of lines of code can become similar to the breaking of smooth lines of movement. When lines of movement are broken in a drawing they can suggest accident or rupture. 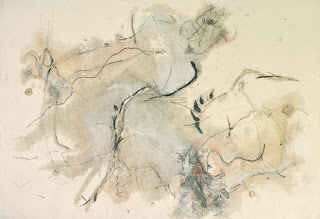 The drawings of Avis Newman suggest a moment of rupture or traumatic event, simply by breaking the smooth continuity of lines. She herself refers to drawing's ability to create 'fractured' space. These drawings can also be read as the script from a finished performance and perhaps at some future date as a map for coding. As I begin to think about how breaks and discontinuities in lines create narratives about themselves and at the same time metaphors for our experiences of the world itself, I'm reminded once again of those dialogues with other non human things that seem to be becoming more and more important to me. 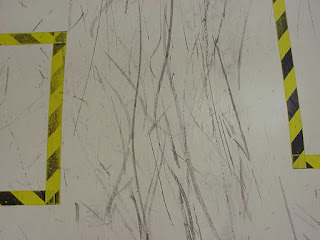 The scuffed vinyl floor above, is another trace of a performance, one that has many actors involved in its performance. If I try and remove the egotistical nature of art practice from any ideas about 'intention' then the drawing seems to comfortably take its place as the record of a series of encounters, an idea that I have tried to deal with earlier.