Rubbings and frottage emerge from the graveyard 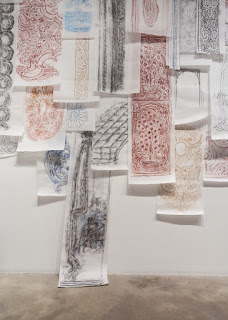 It used to be that the only rubbings taken seriously outside of those made by children were brass rubbings made of tombstones. I well remember the activity in the 1960s, several people I came across in those days spending their weekends travelling round looking for the perfect tombstone to take rubbings from. They also had specific tools for the work, certain types of papers and special wax blocks. But with the recent exhibition of Michael Rakowitz at the Whitechapel and Simon Woolham's exploration of the Kennet & Avon Canal at the drawing centre  in Trowbridge, you can see that there is a growing awareness that a direct touch with a surface has far more possibilities than might at first be apparent. Rakowitz has used rubbings in more than one exhibition to transfer information from one context to another. The decorative details that exist across many threatened architectural monuments, can be re-presented by a rubbing far more intimately than by a photograph. For one thing you know they are size for size and you also realise that someone had to climb up onto the architecture, place the paper over the surface details and make the rubbing. This much more physical record is emotionally much more highly charged than a photograph which by its very nature implies a distancing from the subject. 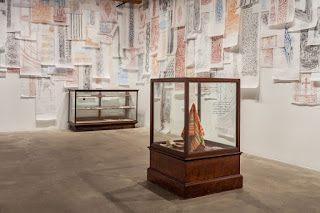 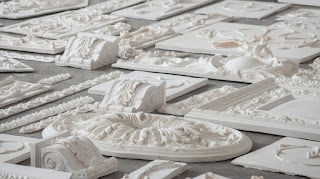 Rubbings can be thought of as very shallow casts. Rakowitz using both processes to capture his experiences of the way conflict is destroying the architectural heritage of the Middle East.

Simon Woolham's exploration of the Kennet & Avon Canal uses the process of making rubbings differently, he recreates the various experiences of surface that he comes across on his walks, by building complex reconstructions or compositions out of the huge number of collected surfaces that he brings back with him. Not only composing the rubbings by finding new juxtapositions for them, he will cut out sections so that he can use geometry to give order to what could be a chaotic mess and work into the compositions other types of drawings that are more observational. As these constructions are built they can also take on an environmental aspect, especially as they reach floors and ceilings and spill out into the spaces of a room. Because Woolham is also a performer, these adjusted spaces can then also become settings for other things to take place such as musical or spoken performance. 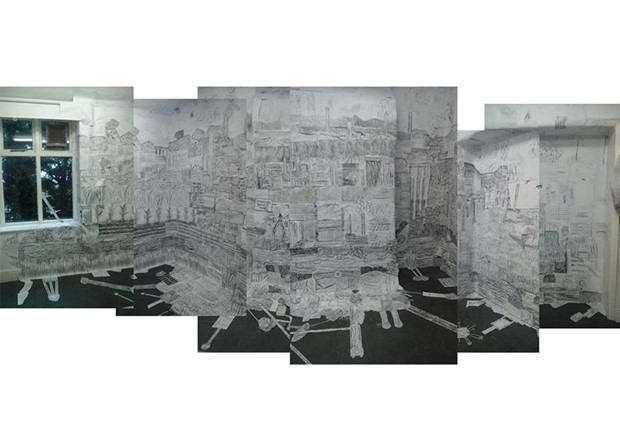 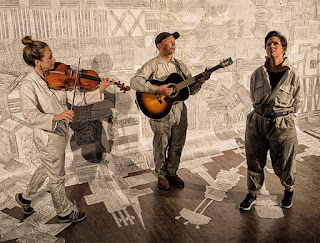 An animation made by school children working with Simon Woolham

The great thing about working with rubbings is that people don't get worried about their drawing ability. Simon Woolham's work with school children proving that very sophisticated results can emerge from collaborative ventures.
Do Ho Suh uses rubbing to capture the essence of a lived in space. He can then transport that space elsewhere and exhibit it. Sometimes using sewn fabric to do the same thing, he presents ghost like recreations of spaces he has known. 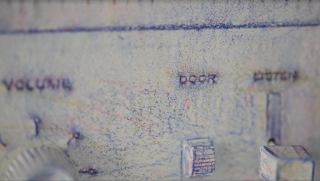 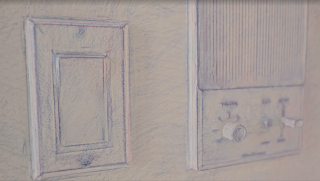 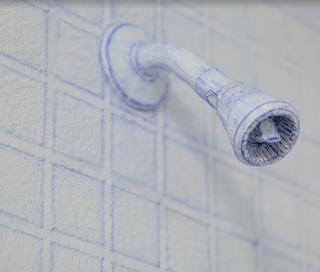 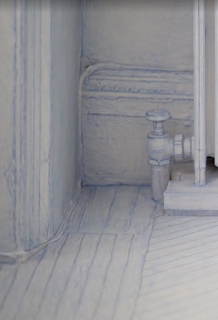 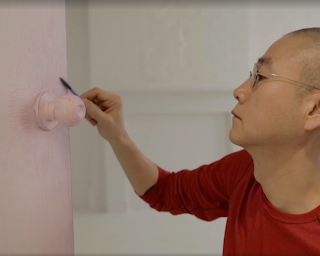 Do Ho Suh
The use of rubbings as an art form is often regarded as something originating in the work of Max Ernst. Using the wooden floor in his room, he began to take pencil rubbings and as he did so realised that these rubbings suggested ideas to him. This was an ideal Surrealist technique, which he first called grattage and subsequently frottage. It was of course a very old idea, Shakespeare had this to say about it;

Sometime we see a Cloud that's dragonish,
A Vapour sometime like a Bear, or Lion,A tower'd citadel, a pendant Rock,A forked Mountain, or Promontory,With Trees upon't, that nod unto the WorldAnd mock our Eyes with Air.--Anthony and Cleopatra (Act IV Scene II) 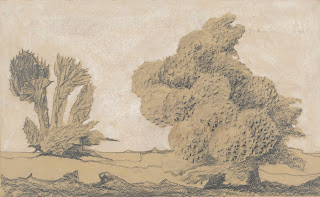 
What was also interesting about these Surrealist inventions was the use of titles to further reinforce the feeling of unreality. In this case 'Le Start du Châtaignier', in English, 'the Chestnut tree start', continuing to not provide an answer as to what the image is all about. I do think we could spend more time thinking about how to use titles. From Turner writing long poems for his titles, to abstract artists giving their work titles reflecting those of musical terms, such as 'composition 23', there have been many attempts to include the title itself into the meaning of the work. If you visit an exhibition, it is interesting to see how much time visitors will spend reading titles and other associated information, so for an art form that prides itself on not having to use words and a 'what you see is what you get' attitude, this suggests that audiences are not so sure and they want a belt and braces approach to finding meaning.

Not that the old traditional skills of brass rubbing should be discounted. Some brass rubbings I have seen were very powerful images in their own right. The dense black of a wax 'heelball' pushed into the surface of 'butcher's paper' (a 22–30-inch-wide roll of white paper) can be used to produce a beautiful negative. 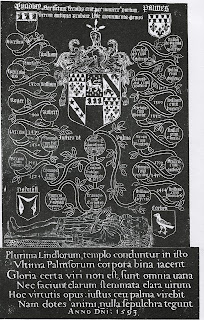 Brass rubbing from a church in Otley, West Yorkshire

Astral wax used to be the wax of choice for making brass rubbings. 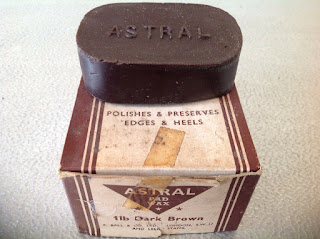 I have been unable to find any lately except on E Bay and people want astronomical prices for it. The nearest substitute I have found are some shoe polishes, (which of course was what Astral Wax was originally made for), especially if you take the wax polish block out of the tin and leave it out in the air for a few weeks, this seems to harden it up and make it more suitable for making a rubbing. Butcher's paper was used for wrapping meat and there are still butcher's papers being made. Some are wax coated but you can also get them uncoated. Rolls of butcher's paper can come in beautiful colours as well as white, one colour that is specific to butcher's paper being a pink peach. It is of course a very interesting paper to draw on and because it comes in rolls can be an ideal paper to use when trying to develop a different 'feel' to large images.
I'm drifting off tack again. The important issue about rubbings is that they bring the sense of touch back into the way we think about collecting information about the world and communicating this to others. Touch in many ways comes before sight, as a baby, you need to touch the world to decide it is there, your eyesight is yet to be trusted. Therefore rubbing could be seen as a more essential or authentic record of a certain type of encounter with the world. But it is hard to get away from the fact that frottage is also “the act of rubbing against the body of another person, as in a crowd, to attain sexual gratification.” Which reminds us that rubbing is when you think about it, quite sexual as well.

Jane Eaton follows the logic of two dimensions moving back into three dimensions in her frottage work. If we think of a rubbing as shallow sculpture, or a type of low relief, then it is no surprise to find frottage as an entry into more sculptural thinking. 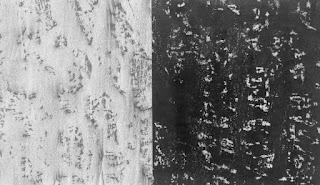 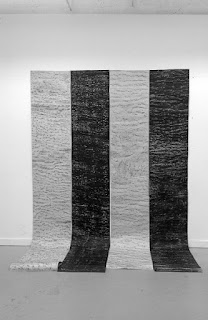 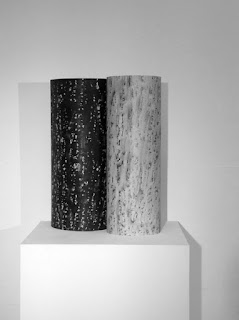 The transfer of texture onto a flat surface from a three dimensional experience is after simply being rolled into a cylinder, a new object, column like, its texture suggestive of marble. Treating one surface as a dense black and the other much more lightly creates a basic dark/light opposition, which is very effective as a structural device. 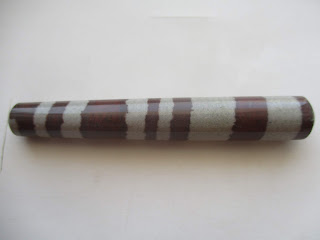 As I let these various thoughts spill out, for one reason or another I am reminded of Banalinga stones. These are used for Hindu worship in India. Found on the beds of rivers they are smooth ellipsoid stones that feel as if they were made to be held in the hand. Also called the Svayambhu Linga: a Sanskrit term for a “Self-existent mark or sign of God”, because they are discovered in nature and not carved or crafted by human hands. Their forms are often a simple roller shape that is roughly cylindrical. These forms are also about touch. In their case it is the action of water on stones being rolled along the river bed that makes their unique forms, the touch of water on stone, coupled with some abrasive grit, making something of beauty. Another case of non human action resulting in objects that can appear at first sight to be manufactured by hand. This 'sign of God' perhaps now read as a 'sign of nature' a reminder that we are no different to animals and minerals and other things, simply events linked to other events as we process our way through a mass of interconnected entanglements. 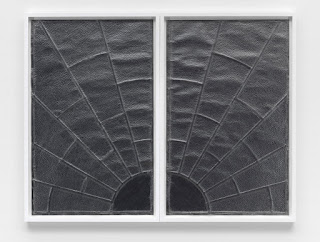 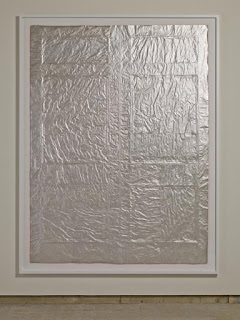 Hanna Barriball has long been interested in the indexical; i. e. the one to one relationship a rubbing has with the thing that is rubbed. By pushing hard on the materials she makes her rubbings with she also engages with the sculptural qualities of the various papers she uses. She makes her images by rubbing so hard she pushes her paper into the indentations that are part of the surfaces being rubbed, thus making in effect shallow casts of the surfaces she is exploring.

Paper casts sit in that space between relief sculpture and drawing on paper, made from one sheet of paper, they carry an impression of the surface they were moulded over, but they are still a single sheet of paper thick. Paper moulds can be used to make a negative impression of a building or object, from which a positive could be cast. Paper moulds were used by archaeologists in the mid-nineteenth century to copy the façades of monuments such as Angkor Wat in Cambodia, Palenque in Mexico or the Alhambra in Spain. Described as ‘facsimiles’ by the inventor of the technique, Lottin de Laval (1810-1903), paper moulds allowed explorers to transport a version of a building or sculpture with all its details back to the museum. As a cheap and extremely light method of reproduction, they allowed the explorer to travel further, into previously uncopied territories, into the Mexican and Cambodian jungles for example, where the huge weight and fragile nature of plaster would have proved prohibitive. For instance Alfred Maudsley made paper moulds of Mayan Temples. 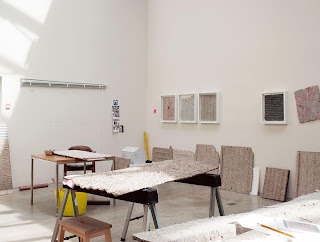 In 2017 Rachel Whiteread shredded a plan chest of drawings to make paper mâché, which she cast on sheets of corrugated iron. In effect she was repeating the Lottin de Laval process, and like Michael Rakowitz casting off architectural fragments. The dialogue between people and objects being linked in this case by touch.

See also these other posts that reflect on touch

I'm reminded by Patrick Ford of a project he was engaged with back in 2017. He was already engaged with a dialogue with rubbings, rocks and the implications of object orientated ontology. See his blog where he explores work in process. 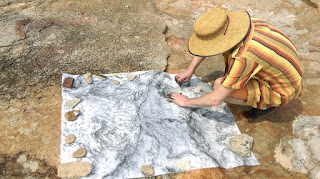 Patrick Ford at work
Posted by Garry Barker at 14:10