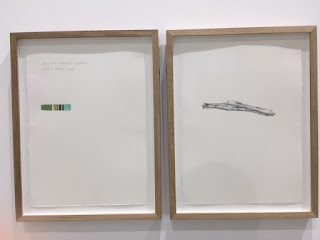 Ilana Halperin is exhibiting her drawing led practice ‘Minerals of New York’, at the Leeds Arts University's new Blenheim Walk Gallery from the 29th of March to the 9th of May, and an examination of her practice is an ideal opportunity to think about how current theories associated with what has been called 'the material turn' work as conceptual tools.

In a Studio International interview with Janet McKenzie, Halperin had this to say about her relationship with drawing, "Drawing is a trace fossil of a moment, an idea, proof of life. We make contact. Movement through space and time, layers of thought (material) accumulate. Drawing is like a stratum of activity – layers are laid down one upon another. It allows a process to develop through time. Every object (drawing) is a record (trace fossil) of its own formation. For me, drawing and printmaking – especially in relation to etching – is a physical and narrative process that allows me to make poetic links across time and space".

I found her interview fascinating, as she refers to some of the central themes that have been explored in this blog over the last few years, in particular the need for human beings to become much more aware of the entangled part they play in the physical processes of life and how drawing can itself be regarded as a deeply metaphorical material process.

In 'Anti-Oedipus', Deleuze and Guattari put an idea of human immersion into the physical nature of the world like this; "He thought that it must be a feeling of endless bliss to be in contact with the profound life of every form, to have a soul for rocks, metals, water and plants, to take into himself, as in a dream, every element of nature, like flowers that breath with the waxing and waning of the moon." (1983, p.2) Deleuze and Guattari point towards a need to re-merge with the world we inhabit, to sink into its very grain; reminding us that we are part of the Earth's texture, even if we are the bit that gets stuck under the world's fingernails. We are after all, as they state, 'only a process'. (Ibid) 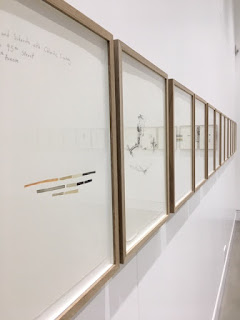 Halperin's drawings line the walls of the gallery, each one framed behind glass, each sheet of which is held in a wooden frame. The fact that each drawing is a focus on a material fact, immediately shifted my own focus onto the material presentation of the work itself. Ordinary glazing glass is composed of approximately 75% silicon dioxide (SiO2), glass 'forma' being sand (silica) which when looked at closely is made of millions of tiny quartz pebbles. However something happens when at 1700°C the crystalline quartz melts and becomes glass, this new structure combines some of the properties of a crystalline solid with some of the properties of a liquid, becoming in the process neither. Glass being something that floats in between states, its very transparency, seeming to suggest a ghost like material that isn't quite there. Often formed into glass doors, doors that seem to be designed to facilitate that comic routine of walking straight into them, an activity also designed to ensure we are all well aware that glass is also a solid. As well as silicon, there are other elements that are required to make glass sheets for these drawings' protection. An alkali, oxide of sodium in the form of soda ash, will have been used as a flux, which is used to lower the melting temperature of the silica. Traditionally soda ash was made from burning sodium rich marine plant life such as kelp and seaweed, and it can also be mined or produced in chemical factories, but before its use as a flux, it had another use, that of a dryer or desiccant in Egyptian mummification rituals. Calcium, in the form of limestone, that sedimentary rock made of billions of crushed organic bodies, is used as a stabiliser, without which water would gradually dissolve the glass, its removal a catastrophe for all aquariums and finally we find lead, which is added to make the glass as shiny as it is, it gives the best glass that clear brilliance that allows us to see the fine details in these drawings laid out beneath its surface. It is as if by placing these drawings beneath glass, Halperin echoes the process of material conversations that she has already had, conversations that carry on without her, as we mentally dig down through the drawings into the wall beneath them, a wall that was once part of a lecture theatre, a wall erected on the site of a previous school building that itself had brick walls made of Yorkshire terracotta clay, a school that this writer once used to go to on an evening, so that he could visualise his ideas in a ceramics evening class. 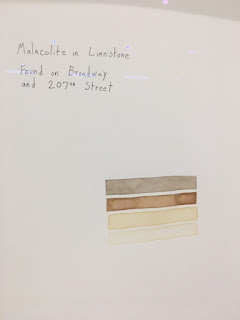 Halperin has made small studies of the rocks she has found, in particular making pairs of drawings, one always analysing the colour range of minerals discovered, and the other presenting an observational drawing done in pencil (graphite). All materials have colour, and as was pointed out in the last post, artists such as herman de vries have made us very aware of the relationship between soil colour and location, each soil sample for instance, being (when dried out and crushed to the same consistency), of a different colour value. Halperin, like herman de vries relies on a formal presentation technique to give verification or honorific value to her collections of colour and observed form. It is as if she regards the streets of New York as being a place for the collection of exotic species and I was reminded of pages of Charles Darwin's notebooks from his Beagle voyages as I walked along past the framed pages of Halperin's observations of New York's minerals. 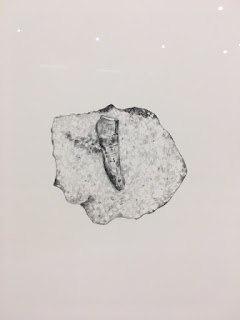 The free e book, Mineralogy of New York: Comprising Detailed Descriptions of the Minerals of New York (State), Natural History Survey by Lewis Caleb Beck, is an excellent companion for this exhibition, because you can immediately delve down into the deeper complexities of mineral formation. For instance malacolite is a type of pyroxene, a stranger to fire, named as such because it was at one point thought that although these types of rocks are often found in lava flows, that these prismatic crystals of four or eight sides, shouldn't, it was reasoned at the time, be there. It could be regarded therefore, that malacolite in limestone, is a mineral with a strange type of agency, that it is a type of 'vibrant matter'.

In Jane Bennett's book 'Vibrant Matter' she stated; “Each human is a heterogeneous compound of vibrant matter. If matter itself is lively, then not only is the difference between subjects and objects minimised, but the status of the shared materiality of all things is elevated." She points us towards other stories, ones that are about an in-common materiality and in doing so she can help us appreciate what Halperin is trying to do. 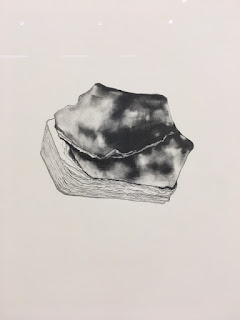 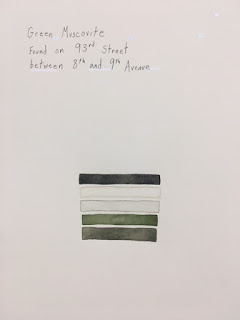 There is a German animation film called 'Das Rad', which takes the point of view of two rocks set into a hillside. For them human action is but a blur of fast movement, far too fast to comprehend, and they puzzle over the various strange things they experience as they become more and more aware of human technology's impact on their environment, but they fail to realise that such short lived ephemeral things as humans could cause such changes. It is as if we failed to realise that mayflies were in fact having a big impact on our lives, which in fact they may. As the advert for the film states, "Apparently, rocks are having conversations all around us, but they talk very, very slowly..."
In the animation, the point of view of human beings is represented in “real-time”, and there are necessary points of contact between the two narratives, which allow us as observers to 'understand' what is happening. Halperin's exhibition operates in a similar way, she provides us with a Rosetta Stone to help us listen to the mineral stories that thread their way through New York and by implication Leeds and every other human habitation that sits upon the Earth's solid ground. As Karen Barad would put it, we have to meet the universe halfway, we need to acknowledge how matter and meaning are entangled and this shift in our thinking is vital if we are to begin thinking about our relationship with the world as a symbiotic one, and one that understands that humans cannot own the world, cannot simply regard it as something to mine for its riches, and that if we don't change our attitudes, the world will at some point become uninhabitable for beings such as ourselves. 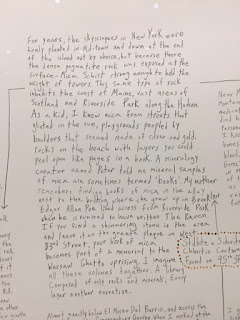 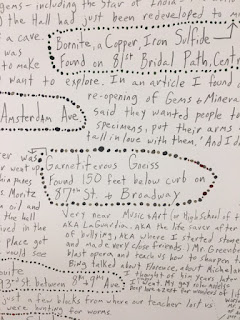 During the 13thcentury the Eastern Italian town of Fabriano due to its close proximity to the port of Ancona, a port that was particularly open to trade with the Arab world, began to develop a specialisation in papermaking, using the skills that Arab artisans had themselves learnt from Chinese traders. The specialist skills that these artisans developed included the use of the hammer mill, a water driven device that superseded the old stone mortars and wooden beaters that had previously been used to break up old rags and vegetable fibres and which did not produce large enough quantities of pulp or homogenous fibre mixes. This ability to manufacture much larger amounts of paper pulp, alongside the development of animal gelatine for surface sizing, meant that as the Renaissance in Italy developed, Fabriano was ideally placed to supply the paper needed for artists, writers and the new booming business of accountancy. After a period of decline in the seventeenth century fortunes rose again, mainly due to a Fabriano specialism in security paper production. In 2002, the year the Euro became the single European currency, the Fedrigoni corporation acquired the historic Fabriano paper mills; its production of the paper used for Euro bank notes, being a factor of Fedrigoni’s decision to acquire Fabriano. The Fabriano paper mills still continue to produce high quality art papers and in particular make specialist watercolour papers, examples of which you will find on the walls of the gallery, carrying the watercolour and graphite marks left by Halperin as she attempts to record her mineral observations. The Fabriano name has remained central to papermaking in Europe not least because of the company’s decision to make both paper for art making and paper for money making. However Picasso’s portrait of the art dealer Vollard made in pencil on Fabriano paper is perhaps a more interesting story of art and money; initially bought by Vollard for 500 francs, if put up for auction today it would possibly become one of the most expensive sheets of paper in existence. However values change and as the Anthropocene unfolds we may well have to renegotiate our relationship with both art and money and find that we have a much closer affinity with the minerals of our everyday environment than we thought we had. 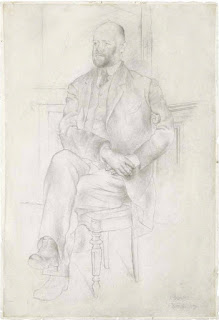