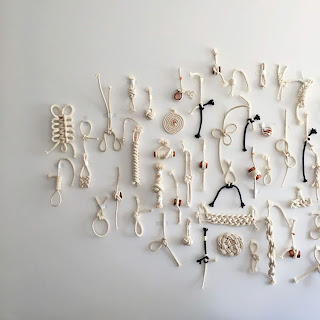 Wendy Chien decided to make a different knot every day for a year. In doing so she was able to explore the knot sub-group of formal possibilities; however if you were to look through the 'Ashley Book of Knots' you would soon become aware that as yet she had only just begun exploring them. Ashley took eleven years to compile the book and was able to document 3,900 different ones.  For Chien tying knots became part of a meditative daily practice and their presentation format became an important aspect of the work. 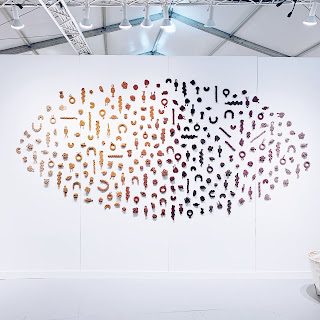 Over the years I have seen knots used in a variety of ways by various art practitioners; performance artists, conceptual artists, sculptors and artists that draw have all found the humble knot at one time or another central to their practice.

The thing about knots is that they are really practical and can be used to tie lots of different things together in many different ways and for a wide variety of purposes. However because both humans and other creatures have been using them for so long, they have a complex body of mythology surrounding their use and therefore if you begin to use knots in your practice you will find that they bring with them a rich story telling heritage. 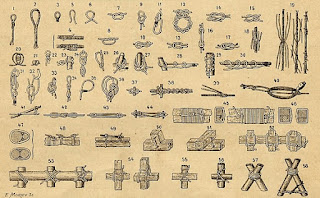 How to knot things together 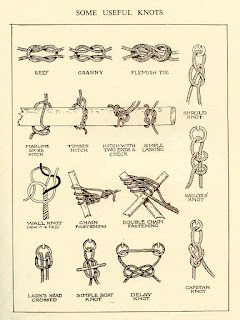 These drawings of knots are themselves interesting, because the artist making the drawings would have to convert an idea of a three dimensional knot into two dimensions; and you can't tie a knot in a string in two dimensions. The issue about dimensions is about topology and as someone that works between two and three dimensions I'm immediately interested. This is where knot theory comes in and more than six billion knots and links have been tabulated since the beginnings of knot theory in the 19th century. Chien's 365 knots, now seeming totally insignificant when matched against the total number of possible knots that have been identified in the field of topological form. 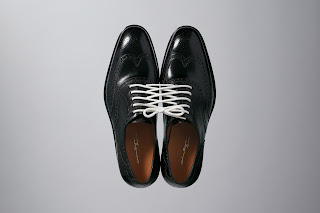 As soon as you begin thinking about them you find knots everywhere, from braided hair to shoelaces, from heraldic knots on family crests to the  knots in the illuminations decorating “The Book of Kells.” There are knots of legend, like the Gordian knot that Alexander the Great sliced open with a swing of his sword. There are knots reputed to have magical properties, such as the knots tied by Laplander shamans in handkerchiefs, which, when loosed, could raise a powerful wind. In the Inca Empire, bureaucratic information, such as tax registers, calendars and military records, was stored using knots, on devices called quipu. 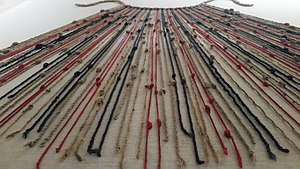 A quipu is a particularly fascinating thing. On the one hand it operates as a positional ten-based numeric system that, instead of using written symbols, uses knots. On the other hand quipus could record a story in a similar way to a Vanuatu sand drawing or contemporary musical notation. The positioning of the knots representing important elements of a narrative that a performer would then bring to life. Echoes of similar practices are still evident locally in Yorkshire where each fishing village on the East coast would have its own 'Gansey' pullover design. Different combinations of motifs of nets, fish, ropes, herringbones, ladders, rope twists etc. were knitted into these fisherman's clothes, so that if drowned and picked up on the coast somewhere, you could identify where a man came from and elements of his life story could be extrapolated from the jumper he wore. 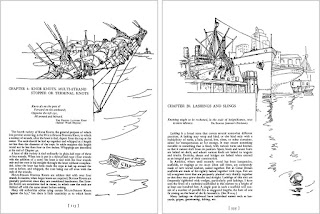 The sculptor Terry Hammill exhibited a very interesting piece using an old sling last year at the West Yorkshire Printmakers Gallery. The sling, which would have been given to soldiers, comes with various illustrations that demonstrate ways of using and tying it. 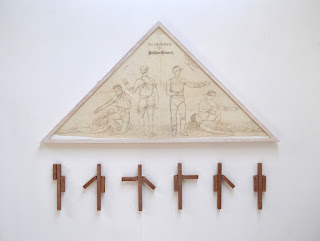 The two pages from the 'Ashley Book of Knots', show how sculptural knots are. They are the perfect synthesis between 2D and 3D, being two dimensionally linear, (most early perspective drawings were made by snapping taut chalked string lines on floors) and in three dimensions used to contain a mass, such as the elephant above, the ropes encasing of the form, also being a three dimensional representation of it, as in a cross contour drawing. 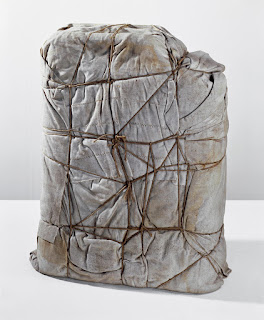 Artist's as diverse as Christo and Jeanne-Claude and Tehching Hsieh have all used ropes as important signifiers in their work. Hsieh for instance tied himself to fellow artist Linda Montano with a rope for an entire year, the rope suggesting in this case, what its like being tied to someone for life, a form of stoical endurance. Whilst in Christo and Jeanne-Claude's case familiar objects and landmarks acquire a new significance as they are covered and tied down.

Ope Lori uses the 'tug of war' metaphor to explore limits of gender and sexual difference, the rope both tying people together and operating as a way to test out dominance, every 'tug of war' enactment being in effect a theatrical power-play, whilst Dutch artist sandra de groot makes knotted, wearable macramé sculptures that reference armour and African headpieces. 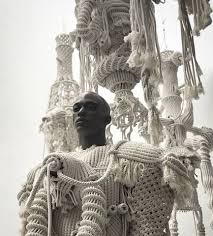 We can forget that crafts such as hair braiding, macramé and knitting are all part of the extended knot tradition. Shani Crowe straddling the worlds of hair braiding and fine art. 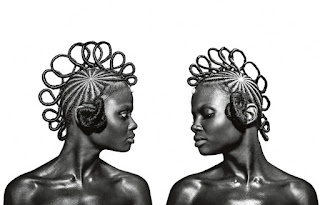 Knots are so ubiquitous that we forget they are there, but every time you tie your shoelaces first thing in the morning, you are engaging with their potency. Your own life line continues to wind its way out into the world and as it does so it weaves its way around people and things that you encounter, tying them all to yourself in ever complicated ways. 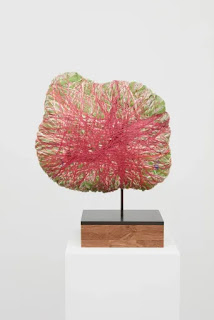 The weaving of grids
Drawing as entanglement with life
A link to a paper on how knot theory can be used in textile design. This is a summery of a very interesting presentation I attended in Loughborough a few years ago.